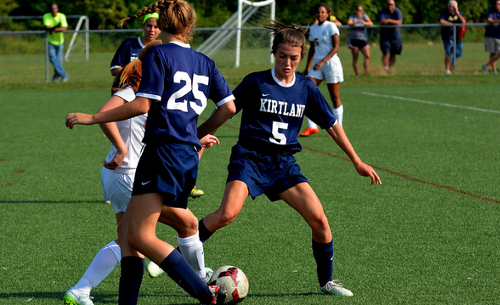 Kirtland coach Ed Bradac worked hard to recruit Grace Powers out of the hallways and onto the soccer field.

Powers, a standout basketball player and track athlete at Kirtland declined Bradac’s offer to join the team as a freshman and as a sophomore. She finally caved and joined the squad this season and on Tuesday she scored three goals in Kirtland’s 9-0 win at Independence.

“This is her first year playing soccer for us,” Bradac said. “I have asked her, I kid you not, since her freshman year to come join us. Finally this year she decided to play and right away we knew we had somebody that was going to help us. She did a tremendous job. She’s a great team player whether she starts or comes off the bench.”

“We switched it up to try to generate some more offense,” Bradac said. “Obviously it worked.”

Hannah Vouk scored two goals and Hallie Ward, Lauren Lutz and Kerri Zalba each contributed with one in the win.

The Hornets led 6-0 at halftime and did their best not to run up the score.

“The bigger problem for me tonight was we went our JV to Crestview so I didn’t even have extra players to put in there,” Bradac said. “I thought it was a game we should win but we’ve never beaten them by that amount.”

On the other sideline, Independence head coach Bryan Less was proud of the effort his girls turned in, despite the lopsided score.

“We lost to a better team,” Less said. “No shame in that but our effort was low in the first half. We picked it up and never gave up in the second half. I was proud of the fight I saw tonight.”

Kirtland improved to 2-1 overall. The Hornets host Orange on Thursday. Independence dropped to 1-3. The Blue Devils host Harvey on Thursday.