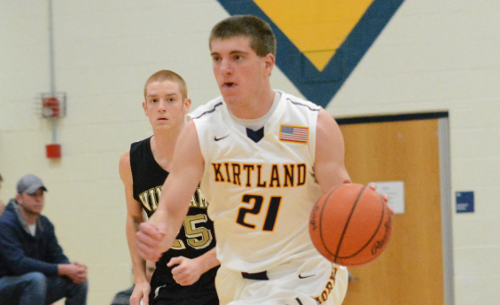 Kirtland jumped out to a big lead then played well on both sides of the court to defeat Windham, 66-47, on Monday.

After struggling on offense early in the season, the Hornets shot 39-percent from the floor and were 10-of-22 (45-percent) from behind the 3-point arc.

“We finally had a good shooting night for us,” said Kirtland coach Nick Gallo. “It was nice to kind of get out of a slump.”

Matt Grazia, who scored a game-high 19 points and now leads the Hornets with a 13.3 points per game scoring average, drained four 3-pointers in the first quarter alone as Kirtland built a 29-13 lead.

Sam Skiljan also hit a 3-pointer as the Hornets took control of the game in the first quarter.

“When teams zone us we’re just very confident and we’re able to move the basketball and shoot it really well,” Gallo said. “I think we can penetrate the gaps and kick out. We just did a really nice job of not letting the ball stick and sharing the basketball last night.”

Jacob Boyd scored 12 points for the Hornets while Skiljan finished with 11 and Owen Lewis and Cole DiFabio pitched in with nine and eight, respectively.

Skiljan also shined on the other side of the floor as he shut down Windham’s best player, Dillon Blewitt.

“We put him on assignment on Blewitt, he’s their best player, and we just gave Sammy the challenge of not letting that kid score and he took that challenge on and won it,” Gallo said. “Every possession he just worked his tail off to help us defensively. The whole group too, we’re starting to communicate much better. That was our best communication game I think. As a team, it was five guys on a string playing great defense.”

DiFabio led the Hornets with 12 rebounds.

“Cole played a great game again,” Gallo said. “He’s been so efficient for us all year. He was really effective on the glass and passing it ahead of guys and us getting in transition. He’s been solid for us.”

Kirtland improved to 3-1 overall and will play Lake Catholic at Mentor on Friday at 6:00 p.m.