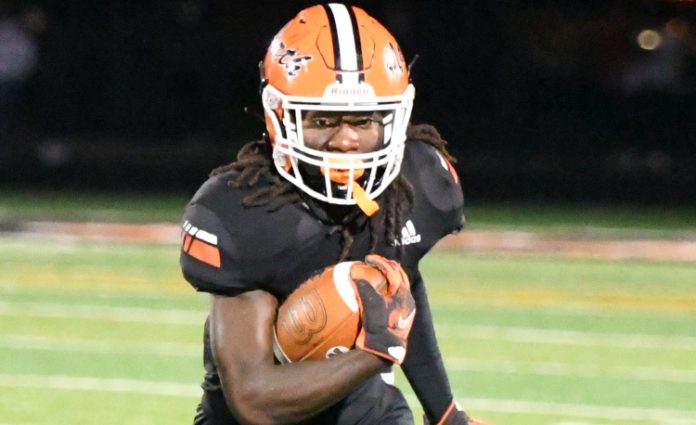 EASTLAKE–Homecoming weekend got off to a smashingly good start on Stevens Boulevard as the North Rangers snapped a three-game skid with a 24-19 win over visiting Brush on Friday at Nick Carter Stadium.

The Rangers relied on running backs Reon’tae Lowery and Mo Morgan to set the tone early.

“They were actually probably a little bit bigger up front defensively, and we knew that coming in,” said North coach Shawn Dodd. “We were hoping to wear them down a little bit, and we believe in our skill guys and Reon’tae and Mo ran really hard (for us).”

Lowery found success behind North’s imposing offensive line as he scored twice in the first half. Morgan added a one-yard touchdown run early in the second quarter.

To their credit, the Arcs shook off the miscues and played toe-to-toe with the Rangers.

After North scored the first touchdown of the game, Brush’s Terrance Williams, Jr. returned the ensuing kickoff 98 yards for a touchdown.

Trailing 21-7 with under three minutes left in the half, Brush sophomore running back Tanelle Rose exploded up the middle for 71 yards on the ground to put the visiting team in prime scoring position.

Two plays later, it was Chris Tinsley cashing in from one yard out, but North’s monster left tackle – and 2021 Homecoming King and Pitt recruit – Ryan Baer got an outstretched paw on Brush’s extra point attempt, deflecting the kick and leaving it 21-13 North.

Now under two minutes to halftime, Curtis Thomas took the ensuing kickoff 68 yards up the home sideline to put North in plus field position once again. Unfortunately for the hosts, the Rangers fumbled away the ball.

Thankfully for North, Brush’s last possession of the half was quickly snuffed out via a timely sack by junior linebacker Dylan Hargas. The visitors declined to push the tempo from there on out, sending the hosts to the halftime break with an eight-point advantage.

North received to open the second half, taking over at its own 28-yard line. A holding penalty on the Ranger’s first play from scrimmage set the hosts behind the chain on the possession, and they would punt two plays later to give Brush the ball at its own 37.

The Arcs came out slashing and gashing North in the run game behind the talents of Rose and Tinsley, taking its first three carries of the half deep into Ranger territory. Yet another fumbled quarterback and running back exchange put Brush behind the chains, however, and the North defense was able to get off the field with 6:30 left in the third and no damage done.

Seemingly stagnating on its second possession of the half, a roughing the passer penalty on North quarterback Anthony Gallo gave the Ranger offense new life and a fresh set of downs, and Morgan again made the Arcs pay, this time rushing 43 yards around left end.

Senior kicker Daniel Tadic would go on to hit a 23-yard field goal from the left hash a few plays later, putting North up 24-13 with three minutes left in the third.

Now into the fourth quarter, Brush put together a nice drive of its own on offense, capped off by a 13-yard jaunt up the middle by Tinsley to pull Brush within five, 24-19, with 10 minutes left in the contest. The Arcs went for two, but the conversion attempt failed.

Yet another squib kick – Brush was clearly avoiding kicking to the dangerous Thomas at all costs – gifted North good field position at its own 35 to start off. This time, however, the Arc defense held, forcing a punt that resulted in a touchback and Brush took over at its own 20.

The North defense held its own as well, though, forcing yet another Brush punt from deep in its own territory. After stalling once again on offense, North was forced to punt and play defense in hopes of securing the final game-winning stop.

Just as the Brush offense took the field with 2:37 left and the ball on its own 23 to try and win a one-possession game, what had been a steady rain quickly became a deluge, and the Arcs struggled to move the ball amidst the downpour, failing to convert on fourth-and-10.

The home team would take it from there, running out the clock and securing the big Homecoming weekend win, sending the soaking wet Ranger faithful home happy.

“The scoreboard doesn’t show how hard these guys work in practice every day; and how hard they play. Their effort has been tremendous, we’ve just made a lot of mistakes lately,” said Dodd. “That’s not to take anything away from the teams that beat us – credit to those teams and credit to Brush tonight, those kids played hard. We were just able to overcome some of those mistakes tonight.”