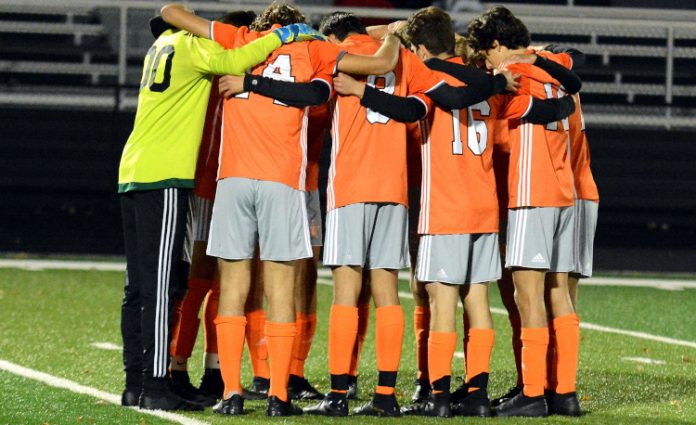 Kaden Kocin scored a pair of goals and three other North players scored as the Rangers downed visiting Kenston on Tuesday, 5-0.

The win was the first for the Rangers over Kenston since the Bombers joined the Western Reserve Conference in 2015.

With the win, the Rangers improved to 4-4 on the year. That record isn’t indicative of the talent on the North roster, but injuries have taken their toll on the team against a brutal schedule.

The return of several key starters—including junior goalkeeper Bo Vinson—sparked the Rangers to their third straight win and their first shutout of the season.

“It’s the first game we played with a goalkeeper,” Misick said. “We haven’t had a goalkeeper all season; he’s been hurt, our sweeper is out for the year, our right back has been out but he’s coming back tomorrow. We’re going to be as close to healthy as we can be in our next game. It feels good to be able to play their kids in their spots. We’re gaining a little momentum and familiarity and it’s starting to pay off.”

North’s offense found its groove early but the Rangers didn’t capitalize on their scoring opportunities until Dom Kustura found the back of the net with 13:01 remaining in the first half.

“It was great for us to come out against a quality opponent and dominate,” Kustura said. “It was the first time we beat them since they joined the league back in 2015 so it was great to go out there and get the win tonight. The first 30 minutes were tough for us and we couldn’t really get a rhythm going. We had one chance where Kaden beat the guy down the line and squared it to me and left me one on with the keeper and I slotted it with my left foot.”

Floyd Lomis scored a key goal with under a minute left in the first half to generate even more momentum for the Rangers.

“The first half, we were playing into the wind so we were really conscious of balls over, so we tried to commit more defensively. Offensively, we were in all night. We had a lot of chances that we missed in the first half,” Misick said. “They were playing with three in the back, but there was no way they were going to stay with Luka, Kaden and Dom. I watched them play Mayfield last week and they looked pretty good but we just opened them up.

“It’s a big win,” Misick said. “That’s the first time we’ve beaten Kenston since we’ve been in the league with them. We had three ties, so the games have all been pretty competitive. We’re thrilled and we hope we can use this and move forward.”