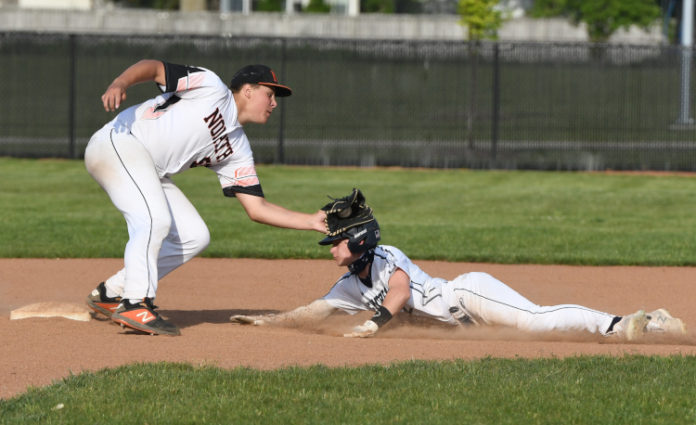 EASTLAKE—North fell behind early and never could overcome the early deficit as the Rangers saw their postseason run end with a 7-4 loss to visiting Hudson in a Division I sectional final on Thursday.

Hudson scored two runs in the first inning and added one in the third before North rallied for a pair of runs in the bottom of the fourth. The Explorers responded with four in the fifth to seal their win.

“They got a little overexcited there and I think that led to some misplaced mechanics and trying to overthrow and over hit, but they kept battling back,” North coach Kyle Stahlberg said of the Rangers. “We came up short but most of that was self-inflicted. That happens in baseball. We’ll learn from it and the younger guys can learn from it. It was a fun season so I can’t be too upset.”

Two walks and a hit batsman loaded the bases full of Explorers in the top of the first. A two-run single gave Hudson a 2-0 lead. A leadoff single in the third led to another Hudson run.

North scored two runs with two outs in the fourth.

Trent Bucy and Devo Britsky hit back-to-back doubles to score the first and Britsky scored on an error.

North’s self-inflicted wounds were most apparent in the fifth.

The Explorers drew back-to-back two-out walks and an error loaded the bases. Hudson’s Wyatt Prado then hit a triple to right-center to clear the bases and he scored on an error to give the Explorers a 7-2 lead.

Bucy reached on a fielder’s choice and scored in the sixth and C.J. Newman tripled and scored on a groundout in the seventh to close out the scoring.

“They got a little overly excited with some things but they kept battling back,” Stahlberg said. “They came in pumped up, I think it was almost too much, and they were trying to overextend a little bit and got too excited.”

After starting the season 10-0, North struggled at times in the Western Reserve Conference, but the peaks and valleys the Rangers experienced during the season will serve the program well in the future.

“We’ve got some young guys up and several that were contributing all the time,” Stahlberg said. “I think it was good for them to go through a winning streak like that and then have to deal with a bit of a losing streak and to learn the focus that it takes to be consistently good in Division I high school baseball. It’s tough but I think they learned a lot from that process and from the older players too.”

Stahlberg and his coaching staff also benefited from the experience.

“Along the way, the coaches and I were talking, I learned so much from this season and how we can try and be better as coaches for years to come,” he said. “I learned a lot from them as well.”

North concludes its season with a Senior Day game against VASJ on Monday.

No letdown for Rangers in big win at Madison