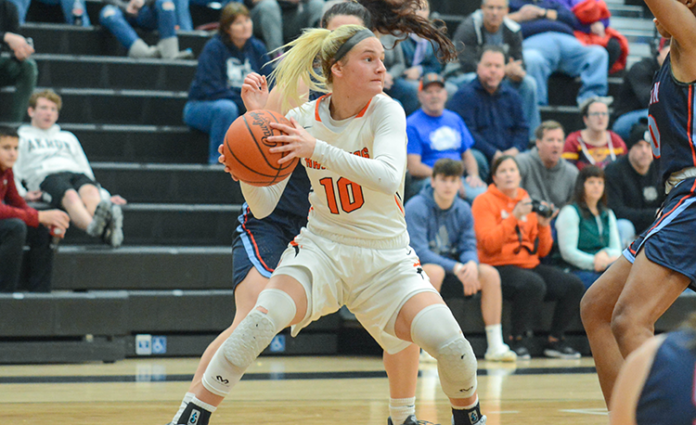 North came out on top in a battle of Lake County’s top girls’ basketball teams on Wednesday.

Abby Carter scored a game-high 26 points to lead the Rangers to the 60-44 victory over visiting Mentor.

“It was nice to get a home game in tonight,” said North coach Paul Force. “Everything felt a little bit different (due to COVID regulations limiting spectators), but I was just proud of our girls to come out and get a win over a quality opponent.”

The non-conference win carried with it a bit more importance considering North and Mentor have been among the top teams in Lake County over the past two decades.

Even more important was the fact the Rangers were far more balanced against the Cardinals than they were in their season-opening win at Cleveland Heights on Monday.

In that win, Carter and Avril Drew combined to score 53 of North’s 64 points.

Against Mentor, that senior duo combined for 42 points while four others rounded out the scoring.

“We talk directly about that kind of stuff,” Force said of the scoring distribution. “Right after the Cleveland Heights game, we addressed that with the kids. It really depends on what the other team decides to do defensively, but we know those two are not going to average 55-60 points per game. That’s not realistic, but depending on what the other team gives us, we had some other kids get some more looks today and that’s certainly a part of being on the floor with those two.”

Avril Drew and Abby Carter of @northrangers Say it’s going to be a total team effort for the Rangers this season. pic.twitter.com/tJ5L6PAXZL

The Rangers held off the Cardinals in the second half to seal their second straight win.

Carter led the Rangers in scoring but also pulled down six rebounds to go along with three assists and four steals. Drew added 16 points and seven rebounds.

“Abby leads us in assists, Avril is probably second. They’re unselfish kids and they play basketball the right way,” Force said. “They just want to win games and they’ll do whatever they need to do on the offensive and defensive end.”

“It was nice to see Sidney Helm knock down a couple of 3s,” Force said. “Cece had a few points and we had a couple of points off the bench from Sydney and Robbie and Katy even got out and got her first varsity bucket. It was definitely more balanced tonight.”

Hailie Wilson didn’t score but she pulled down a game-high 18 rebounds despite giving up several inches to Mentor’s three 6-footers.

“Her contribution on the board was even more impressive since she’s 5-7 or 5-8 and getting rebounds over 6-footers,” Force said. “I think one of the key things that our girls are working to understand is good varsity players can impact the game without scoring. I think we have a few kids that do that pretty well and Hailie is definitely one of them. Cece is definitely one of them. She played 27 minutes and only turned the ball over once. We ask a lot of difficult things on the offensive and defensive end and she’s driving the car. She did a nice job even though she didn’t pop out in the scoring column.”

September 19, 2021
Kirtland bounced back from its first loss of the season with a dominating 6-0 non-conference win at Chardon.