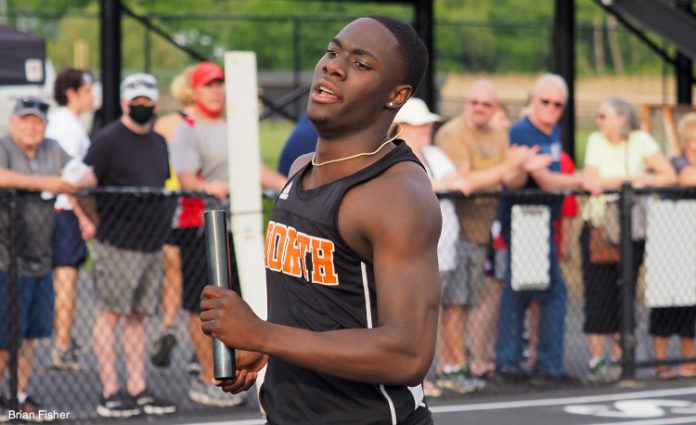 North’s track teams opened the 2022 season with a strong showing at the Bill Fisher Invitational at Cardinal High School in Middlefield on Saturday.

The boys’ team finished in seventh place while the girls placed 11th.

Morgan was the lone Ranger to win an event after he claimed first place in the 300-meter hurdles with a time of 45.35 seconds.

“I am actually very happy with my time because I didn’t expect to get that type of time,” he said. “I wasn’t even going to do the event because that was my first time doing it at all this year.”

He also ran legs in two relays that both finished in fifth place.

Morgan teamed up with senior Lawrence Lawson, junior Curtis Thomas, and sophomore ReonTae Lowery to run a time of 45.82 in the 4×100-meter relay. Morgan, Lowery, Schiciano, and senior Lorenzo Casanova ran the 4×200-meter relay in 1:37.99 seconds.

“I feel really pleased about those three events,” said Morgan, who also finished in ninth place in the 100-meter dash. “It gives me a lot of confidence, especially for my 4×100 team because we ran against some really good teams and I know we’ll get a lot better by the next one.”

“I was extremely satisfied considering this was the first meet of the season and I think there is a lot more success to come,” Anthony said. “In all of my relays, my team worked extremely well together but there is always room to improve, and we will continue to work hard throughout the season. The performance from the first invitational gives not just me confidence in myself, but in my teammates as well. It raises the morale and makes everyone excited to show up including myself.”

Brennen Herbert also placed in the 100-meter dash. She ran a time of 14.67 seconds to finish eighth.