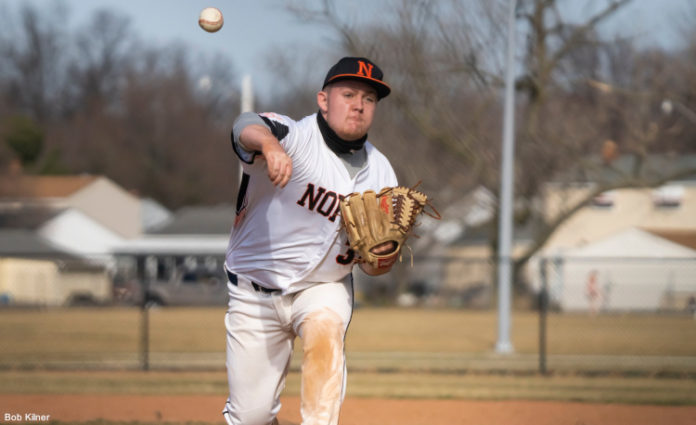 North’s baseball team kicked off the season with a doubleheader sweep of visiting Alliance on Saturday.

The Rangers won game one 5-2 and completed the sweep with a 10-5 win in game two.

“It was amazing getting back on the field,” said North coach Kyle Stahlberg. “Guys had been texting me for months in anticipation of just being able to practice again. So, finally taking the field in a game was a special moment for them and for us coaches. We all love this game, but not having it brought a new level of gratitude and appreciation for just how special it is. Prior to the game, as we were warming up, a player summed it up short and sweet: ‘I cannot remember the last time I was this excited to play.’”

Logan Metz went the distance in the first game.

“We knew coming in that Alliance is a very good team,” Stahlberg said. “We knew minimizing mistakes and walks was going to be key to our success against them. Logan Metz was pumped for this game. I was actually trying to settle him down a little bit beforehand.”

Metz threw first-pitch strikes to 21 of the 33 batters he faced.

“After getting through the first inning, we knew that he was going to have a great day,” Stahlberg said. “He mixed all his pitches well and kept the Alliance hitters off balance all game. He made them hit his pitches and let his defense work behind him. If Metz sticks with this approach, he is going to have a great year. The kid is intensely dedicated to pitching and keeping his arm in great shape. It was awesome to see all his hard work come to fruition.”

Alliance scored two unearned runs in the top of the second but the Rangers responded with one in the bottom half of the inning.

Devo Britsky led off the inning with a double and then C.J. Newman reached first on an infield single. Britsky scored on an error by the Alliance catcher.

The Rangers added four more runs in the third.

Metz and the North defense held the lead.

Matt Barner picked up the pitching win in game two after allowing two runs on five hits and striking out 11 Aviators.

“Barner is a quiet, easy-going guy, and seeing as the last time I really got to see Barner was when he was a freshman, I am still getting to know his personality,” Stahlberg said. “Let’s just say when he walked out onto the mound, we all saw a side of him we’ve never seen before. Pitching angry is maybe the wrong word, but he pitched with some controlled aggression and attitude that was firing everybody up, including me.”

Only one of the two runs Barner allowed was earned and he did not issue a free pass.

“He was fun to watch and it was great to see him get out there and do what we all thought he could,” Stahlberg said. “Brody Spock came in a shut them down by throwing several different pitches for strikes and keeping Alliance off balance and letting the defense work.”

Sean Pesci and Spock both threw one inning to close out the win.

Pesci allowed two runs without issuing a hit. He walked three batters and struck out one. Spock allowed one run on one hit.

Lanning led the Rangers with three hits in the second game, including a triple. He also knocked in a team-best three runs.

Keough and Chris Molica both finished game two with two hits. Keough and Stuck both doubled in the win.

“C.J. Newman, Devo Britsky, John Lanning, Chris Molica, and John Keough had excellent days at the plate,” Stahlberg said. “I think these guys are buying into the contact approach and spraying the ball across the field. Each contributed in a huge way to our big innings. None of them did it alone or with anything overly powerful, but rather a gritty constant pressure throughout the lineup. We also track quality at bats and while these might not show up in the traditional stat line, the rest of the team contributed to the pressure that helped create our runs.”

As a team, North batted .308 on the day with three doubles and a triple.

“We have spent a ton of practice time trying to collectively identify and accept our offensive identity,” Stahlberg said. “I think our guys are starting to buy into our approach of consistent contact hitting. Our guys embraced the focus of hard contact and gritty two-strike approaches to put pressure on the defense. Our big innings were all about getting the ball in play and stringing things together. We talked about this and they executed.”

Stuck caught all 14 innings and contributed on the offensive side with a double and two runs batted in.

“This is tough on the body and the mind,” Stahlberg said. “He handled both starting pitchers very well, which contributed to their success. In addition, he added a bases-loaded double in one of our big innings.”

The Rangers travel to League Park on Wednesday for a non-conference showdown against Villa Angela-St. Joseph.