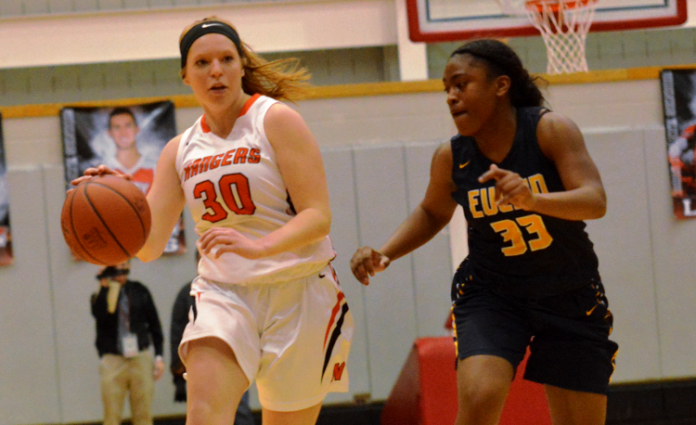 Rangers punch ticket to regionals for first time since 1999

PERRY—Destiny Leo scored a game-high 36 points and Abby Carter added 18 to lead North to a historic 65-57 win over Euclid in the Perry Division I District Tournament championship game on Thursday.

With the win, the Rangers improved to 24-1 on the year and advanced to the Canton Regional for the first time since 1999. The Rangers also matched the school record with 24 wins in a single season.

“I think the girls who had this experience last year were hungry to take that next step,” North coach Paul Force said. “We talk about it all the time, we’re playing for each other. It doesn’t matter who we’re playing against, we always see it as North versus North and the other team is just wearing different jerseys. They played hard for each other and I know they’re excited about it.”

Next up for this year’s squad is Solon, the Euclid District winner, leaving the Rangers focused on what’s to come rather than what they have accomplished.

“I tell the girls there will come a time when we’re going to sit back and think about the season and enjoy it and feel good but that time is not going to be tomorrow,” Force said. “We’re on to the next one.”

Despite an 81-54 win over the Panthers back in December, Force and the Rangers knew they’d face a much different team in late in the postseason matchup.

Earlier in the day, Euclid senior Connie Chaplin was named the Northeast Lakes District Player of the Year and sophomore Alexis Reese was named to the first team.

“This is what late February games are supposed to be like,” Force said. “Early in the year when we ran away from them a little bit, we knew it wasn’t going to be like that. They have way too much talent and athleticism. Connie and Reese, they pose huge trouble for people. That’s why they average 50 points per game. I was proud of how our girls responded.”

North led 34-32 at halftime but began to pull away in the second half and led by as many as nine points with 5:13 remaining in the game.

The Panthers clawed their way back after each North run and pulled to within 60-57 with 1:10 left.

Maddy Hamilton then sank a wide-open jump shot and Destiny Leo followed a Euclid intentional foul with a pair of free throws to push North’s lead to 65-57 with :33 seconds left.

Carter closed out the scoring with a free throw 18 seconds later to seal the North win.

“Obviously, Destiny had a huge game and made big-time plays but girls stepped up around her and kind of picked and chose opportunities on the offensive and defensive end.”

Leo scored 21 of her points in the second half and was a perfect 8-for-8 from the free throw line in the final 16 minutes of play.

Hamilton and Taylor Valaitis both contributed to the win with four points, Avril Drew finished with two and Olivia Oostdyk added a point.

Oostdyk’s greatest contribution came in the paint where she helped redirect Euclid’s offense, altered shots, pulled down four rebounds and tipped several others to her teammates.

“I’m real proud of her,” Force said of Oostdyk, who came off the bench when Drew ended up in early foul trouble. “We talk about that with our girls; everybody prepares like a starter. It doesn’t matter if you’re No. 1 or No. 12 on the team, we all prepare like we’re starters because you never know when a situation is going to arise and when you’re going to have that opportunity. She has worked extremely hard and I was real proud to see her have a moment like she did tonight because she changed the game.”

Carter scored just six second-half points but her defensive effort in limiting Chaplin to just 10 in the final 16 minutes helped the Rangers to pull away from the Panthers.

“Abby had a great first half (on offense) and she did a great job on Connie and kept her to 20 points in two games,” Force said. “I don’t know that anybody in the state has done that. More important than her stats and whether her shot goes in or not is the energy she brings to our team and the floor and I think she’s embraced that the last couple of games. You can’t get caught up on a made shot or a foul called and let that take energy away from you. When she’s playing hard and with a high motor and high energy, I think our bench and our kids on the court feed off of that.”

North and Solon will play Tuesday at the Canton Memorial Civic Center. Tip-off is scheduled for 6:15 p.m. The winner will play the winner of the second semifinal between Aurora and Canton GlenOak on Friday.