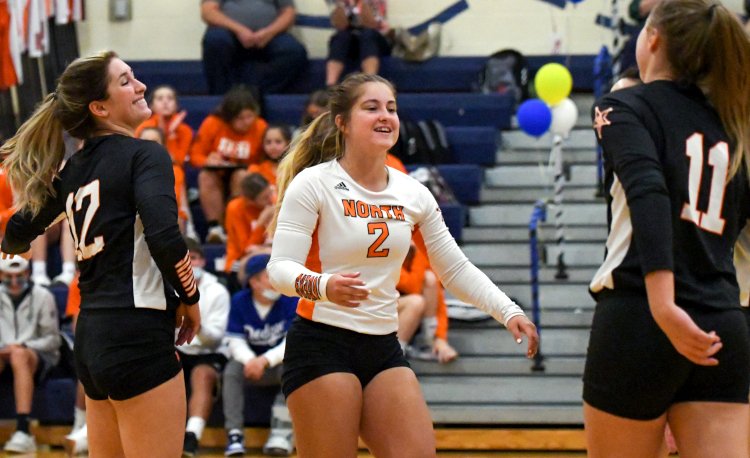 North rallied from a first-set loss to win the next three and the match, 3-1, over Massillon in a Division I sectional semifinal on Wednesday.

“I think in the beginning of the match we were trying to get used to their tempo of a play, I’d say a little slower than we are used to being up against,” said North coach Tamara Heller. “We distributed the ball very well tonight. Jaiden (Anderson) is understanding the concept of running an offense. She made smart decisions with the ball tonight.”

Anderson rose to the challenge of the postseason and put together a consistent effort in distributing the ball to North’s hitters.

“As a coaching staff, we’re really tough on this kid,” Heller said. “I sometimes have to remind myself she’s young. We see so much potential in her as a player, so we demand a lot from her. Beginning of the season, we would see glimpses of it. Tonight, we saw it consistently. I’m proud of her performance tonight, but more importantly, her growth on the season as a whole.”

After Massillon won the first set, the Rangers changed their approach and raised their intensity.

That led to three straight-set wins and a postseason victory.

“We were playing safe volleyball,” Heller said of that first set loss. “Games two, three, and four, we were aggressive offensively and from the service line putting the ball away rather than waiting for the other team to make errors. I think we held our composure well throughout the match and adjusted to what needed to be done to beat this team.”

“It was very exciting to be able to go to round two in the playoffs,” Jablonski said. “We were due for a win and are glad to see our hard work paying off in the postseason. Tonight, the key for our offense was to target the open spot on the other side of the court. Our setter also did a great job and splitting our hitters and running multiple routes.”

Defensively, Breonna Preston recorded a team and season-high 22 digs and also excelled at the service line.

“I felt like I needed to hustle for every ball and play smart to keep my team in system to get our hitters swinging for kills,” Preston said. “Coach Heller always said, ‘if the ball hits the ground then you do too,’ and I did my best to do it even if I got it up or even touched it.”

Once the Rangers found their stride, they captured the momentum and rode that to their sixth win of the season.

“I felt very in the game today and had a lot of fun,” Preston said. “We had a lot of in-system passes to where we were able to set our middles and get kills. Our serves and energy kept us up and in the game.”

The 27th-seeded Rangers advanced to play at No. 4 Austintown Fitch on Saturday at 3:30 p.m.

“To prepare for Austintown Fitch, we have to continue to focus on our serve and serve receive game,” Jablonski said. “We have proved that when those are on everything else falls into place.”