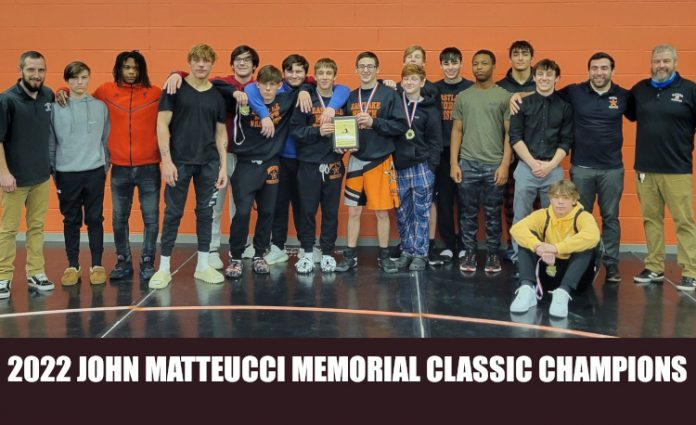 Eastlake North defended its home turf on Saturday by winning the team title at the John Matteucci Memorial Classic.

The Rangers won three individual titles, placed six other wrestlers, and finished with 210 ½ points. Massillon Perry was second with 198 ½.

“I’m very happy with everyone and their performance,” said North coach Anthony Grim. “I really don’t have many complaints, which is a good thing. Usually, I’ll find some things we need to work on, and there are always technique things, but I’m just a perfectionist. The kids showed up and wrestled really well.”

Preston finished 3-0 with three pins in pool wrestling and then advanced to the 113-pound championship bout with a narrow 13-12 win in the semifinals. He beat state-ranked Dominic Leone from Liberty in the finals, 9-7.

Nowosielski finished the day 5-0 at 144 pounds. He recorded three pins, a technical fall, and a decision.

Smith pinned both of his 150-pound opponents during pool wrestling and then won by default in the semifinals and by major decision in the championship bout.

“I’m always impressed with Ethan Smith, even though you kind of expect a kid like him to go out and put up a good performance,” Grim said. “Nowosielski made scratch at 144 for the first time. It was a long night for him while we were there late at night setting up the room. He made weight in the morning and then went out and won the tournament. Dylan Preston also had a really good tournament. He had a pretty easy pool but once it got into the bracket part of the tournament it got a little tough for him. He beat a state-ranked kid from Liberty who was an upperclassman, so that’s a pretty big deal.”

Freshman Shamus Brady and freshman Drake Martinez finished second at 106 and 120, respectively, and junior Derick Martinez was the runner-up at 132.

The Rangers return to action on Thursday with a tri against Twinsburg and Brunswick. After that, North will head to the Boardman Spartan Invitational for one of its biggest tests of the season.

“That’s a Who’s Who of Ohio wrestling,” Grim said of the Boardman tournament. “It’s going to be a true test. It’s nice to get those tough matches out of the way before you get to the district tournament.”