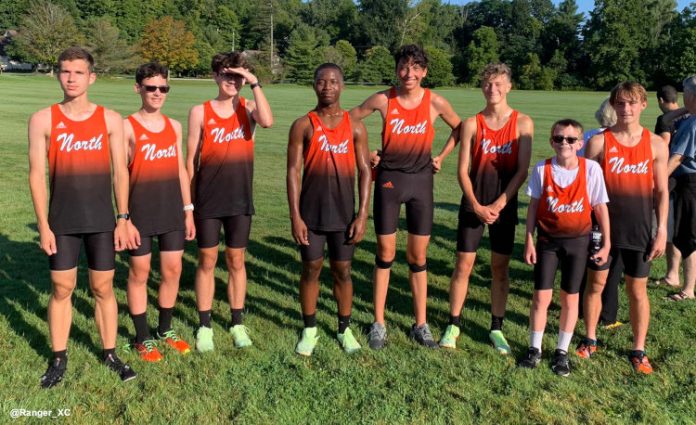 North’s cross country teams turned in a solid season-opening performance at the Solon Invitational on Saturday.

The Rangers set several personal records thanks to a strong summer training program.

“Overall, I was very pleased with our team’s overall performance,” said North coach Rob Grove. “We had quite a few PRs considering it was only the first race of the season. We finished sixth in the team standings. We had a really solid showing over the summer and the kids put in more miles this summer than the previous couple seasons, which showed in our times.”

Junior Troy Federici paced the Rangers with a time of 17:11, good for sixth place in the boys’ race.

“Troy ran really well,” Grove said. “He has set this year’s goal to run sub-17 in the mid 16s. He has worked extremely hard to get where he is. Although he is very quiet, he is also very competitive and doesn’t like to lose.”

Freshman Matt Dupnock’s varsity debut was successful as he placed 21st in 18:17.

“His goal was to run sub-19 for the season, which he has already reached in week one,” Grove said. “He is also a dual fall athlete who plays soccer.”

“Ben spent most of last season injured and has really worked hard and has improved to earn his way up to a varsity spot,” Grove said.

Junior Taryn Trem led the Rangers in the girls’ race as she finished in 25:37.

“We only have five girls on this year’s team but all five have been working really hard and we are slowly getting better and improving each week,” Grove said.

Patience pays off for Blue Devils