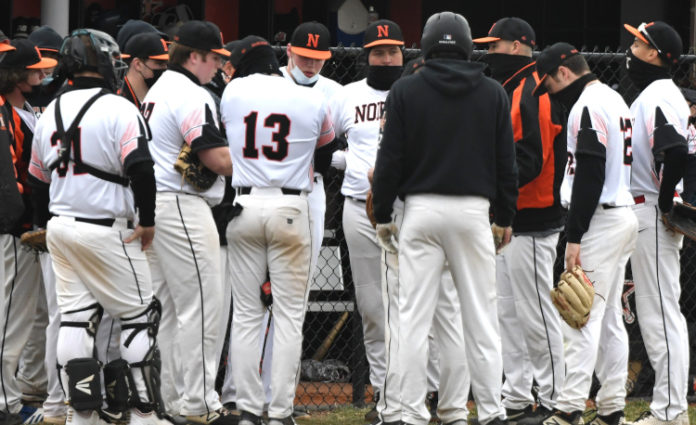 For the first time in school history, North’s baseball team has opened a season with 10 straight victories.

The Rangers beat visiting Brush on Tuesday, 7-0, and then turned around and won the season series at Brush with a 12-2 win on Wednesday.

“They’re having a lot of fun right now,” said North coach Kyle Stahlberg of his players. “It’s awesome to be around.”

According to longtime coach Spark Sankal, an encyclopedia of sorts on North baseball, the Rangers never have started a season 10-0.

North’s success starts and ends with each player’s selfless attitude coupled with executing the fundamentals of the game.

“That’s the awesome thing,” Stahlberg said. “We talk every day a little bit about roles on the team and how roles can change on a daily basis. We talk about it and the kids are buying into it. It’s awesome to see. If you have to sit a certain guy, who is a usual everyday player, it’s awesome to see them being the first guy out of the dugout cheering their teammates on and seeing that every day and not having any people who are having an issue with it. They’re there for each other and they’re having fun.”

The Rangers have allowed just 12 runs in 10 games with five shutouts.

Four pitchers combined to shut out the Arcs on Tuesday and two limited Brush to just two runs on Wednesday.

“Yesterday, with pitching, we had a plan as far as getting some guys some innings while keeping arms fresh for the rest of the week, and today, we did as well,” Stahlberg said of his strategy for the two-game series against the Arcs. “Very rarely can you come up with a plan and be able to stick with it but it’s worked out the last two days.”

Logan Metz struck out five in 3 2/3 scoreless innings on Tuesday. Brody Spock, Ethan Zele, and Trent Bucy combined to limit the Arcs to just three hits in the series opener.

Sean Pesci and Zele both allowed one run to the Arcs on Wednesday while combining for five strikeouts.

Offensively, North has spread the wealth.

Six everyday regulars are batting .350 or better and the Rangers have 24 extra-base hits in 10 games.

Matt Barner was 2-for-2 against the Arcs on Tuesday and he came back on Wednesday and went 3-for-4. He pounded out a double in each game.

Devo Britsky and John Keough both doubled in each game of the Brush series.

The Rangers will be tested on Friday when they travel to 8-0 Mayfield. The second game of that two-game series will be played at North on Monday.

Stahlberg believes the Rangers are ready for that challenge as they have been tested throughout their 10-game winning streak.

“The starting pitcher for Brush today was really, really good. He was probably throwing in the low 80s and a lefty, so we’ve seen good teams and good pitching,” he said. “I think the thing going into to Friday is just to take the same approach and not leaving that and not trying to do too much. Everybody is pitching in and pulling their weight and getting the bat on the ball. If we continue to do that, we’re going to be fine.”