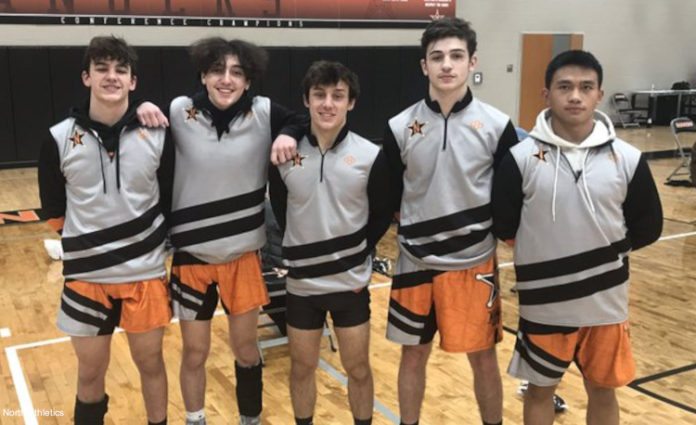 North celebrated Senior Night with a 37-30 win over rival South on Thursday.

The Rangers won the first four matches to generate the momentum that would carry them to the rivalry win.

“I thought we looked OK against South,” said North coach Anthony Grim. “There were a couple of matches that I feel like should have gone the other way, especially some of our seniors against their younger guys, but it definitely feels good to get a win over South no matter how it comes.”

Kailey Lesler-Harrold and Joey Davis both picked up forfeits at 106 and 120, respectively, before Derick Martinez won 6-2 at 126 pounds.

“We thought Martinez was going to get a forfeit at 126 so he wasn’t ready to wrestle at all,” Grim said. “He went out there and performed. It definitely took him two and a half periods to get warmed up but he finished the match pretty strong. In dual meets, team points mean everything so we would have liked to get a pin or a major there but we won the match, which was key.”

The Rebels made it 21-6 with a pin at 138 pounds but North’s Alvin Mamaril stuck his 145-pound opponent in one minute, 22 seconds to reestablish North’s momentum.

“One of our seniors got pinned and we could feel the momentum starting to swing,” Grim said. “Alvin went out there and put a stop to the momentum of South getting ready to change the tides of the dual meet, which could have been bad for us. He went out there and wrestled really hard and when he had the opportunity to put the kid away, he did.”

Dylan Young claimed a major decision at 152 and Joe Nowosielski added a forfeit at 160 to close out the scoring for the Rangers.

“Dylan Young went out there and did what we expected him to do,” Grim said. “He’s really tough on top. He’s not the greatest on his feet but he knows how to get the guy down and did his work on top to get us a major decision. I would have liked to win more matches wrestled but we did pretty good as a team.”

North returns to action on Thursday when the Rangers travel to Lakeside and then on Saturday, they’ll compete in the Western Reserve Conference tournament.

North’s two female competitors will compete in the girls’ district tournament at Lutheran West on Feb. 14.

Lesler-Harrold and Breeona Preston both placed in the 2019 girls’ junior high state tournament as seventh graders but had their eighth-grade championships canceled due to COVID.

Preston placed fourth at 115 pounds while Lesler-Harrold was fifth at 98.

As freshmen, they have the potential to find even more success.

“I have high hopes for both of them,” Grim said. “They were both state placers two years ago in seventh grade in the girls’ middle school state tournament. It was canceled last year but they’re ready to go this year.”