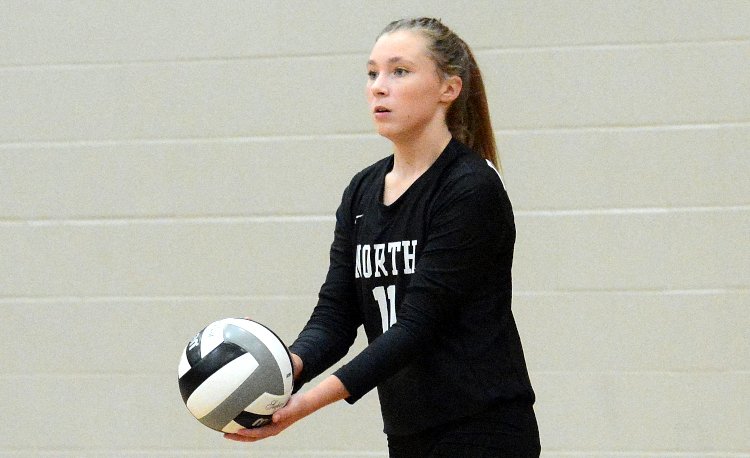 North jumpstarted the 2021 with a 3-0 nonconference sweep of visiting Wickliffe on Monday.

“We’re expecting a lot out of some young girls,” said North coach Tamara Heller. “I have five sophomores on varsity and I’m expecting a lot from some inexperienced players at the varsity level. They haven’t seen this speed yet, so I was happy with the energy and the way we came out. It was pretty good considering our inexperience. We needed that first win under our belt to be able to play up to our full potential. I don’t think we hit that today but we’ll get there.”

North had little trouble winning the first two games. It was closing out the match in three sets that proved to be a challenge.

“We had to give ourselves a goal in the third game like to hold them to 10 points because I know that (a letdown) could happen,” Heller said. “Your confidence gets too high when you’re up 2-0 but I thought we held our composure well toward the end of that third game. Even though we were down, it felt like we had control of the game.”

Sophomore setter Jaiden Anderson is one of the most experienced Rangers and she played like it against the Blue Devils.

She recorded 31 assists and eight service aces in the win.

“She just looks like a completely different player this year,” Heller said. “She’s playing with a lot more confidence and filling her role very well. I told her at the beginning of the year that she has the second-most varsity experience right now because one of our seniors that did play a lot last year broke her hand, so we have one senior that has varsity experience.”

Anderson gained valuable experience on the varsity squad as a freshman and now she’s quickly establishing herself as a team leader.

“It was so much fun getting back out on the court and getting to play with all my friends again,” Anderson said. “Getting the first win of the season was just a bonus.”

Heller spoke with Anderson during the offseason to prepare her for the larger role and leadership position she’d have to fill this fall.

Anderson took that message to heart and the results speak for themselves.

“Preseason this year was different because we had a lot more time together and we’ve created such a strong team bond,” Anderson said. “Coach harped on me all summer about being a leader for this team, and I’m still working on it, but getting better each time I step on the court is my goal. We know the season is going to be tough being a young team and playing in a tough conference, but this win gave us the confidence we needed and I’m excited to continue this season.”

“That was good; I was proud of them,” Heller said. “They held their composure well for never being on the varsity side of things before.”

“Madison’s first game in a Ranger jersey and she played like she’s been doing it for years,” Heller said. “She played very composed and is a big piece to our puzzle this year.”

October 10, 2021
Independence edged visiting Padua in a non-conference match on Saturday, 3-2, to remain undefeated on the season.