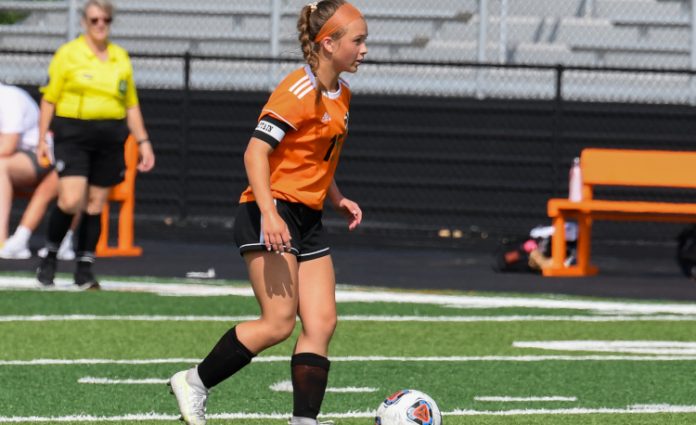 With the win, the Rangers (3-2) extended their winning streak to three games, the program’s longest regular-season win streak since opening the 2015 season 3-0. The Rangers did win their final two regular-season games and their first playoff game of the 2019 season.

“As it’s my senior season, it’s been very exciting,” Washburn said. “The team has been playing our system and keeping good possession of the ball. Our good form will continue over the course of our season and we can have good movement on the field to keep producing these results.”

Washburn gave the Rangers an early 1-0 lead when she buried a Sally Dempsey pass into the far corner of the net just five minutes into the game.

“Sally Dempsey had good field vision and played the ball back outside the 18-yard box where I was able to strike the ball first time and scored on the far post,” she said. “I’m really happy with our results so far this season and I cannot wait to see what the rest of this season will bring for our team.”

That lead held until early in the second half when Dempsey received a pass from Michaela Herbert and finished off her second goal of the season.

“We started off very energized and focused,” Helm said. “We started to play our system and work the ball forward. I received a great through ball from Michaela Herbert and was able to take the ball upfield and score.”

Geneva’s Kylie Schiemann scored midway through the second half but the Rangers held off the Eagles the rest of the way.

“With the three straight wins as a team, I’m so proud of all of the girls,” Helm said. “We have really put all of our time, effort, and heart into this season, and it is finally paying off.”

Backup keeper Vada Belt played in her third game protecting the net and allowed just one goal after posting back-to-back shutouts in wins over Normandy and Brush.

“She has killed it with only one goal in three games for her first-ever starts,” said North coach Rick Sirl.

The Rangers put their streak on the line on Tuesday with a Western Reserve Conference game at Chardon.

“In order to focus on our upcoming games we will critique and analyze our mistakes and work on them during practice and then apply what we learned to our next game,” Helm said.