Rebels down North in rivalry game 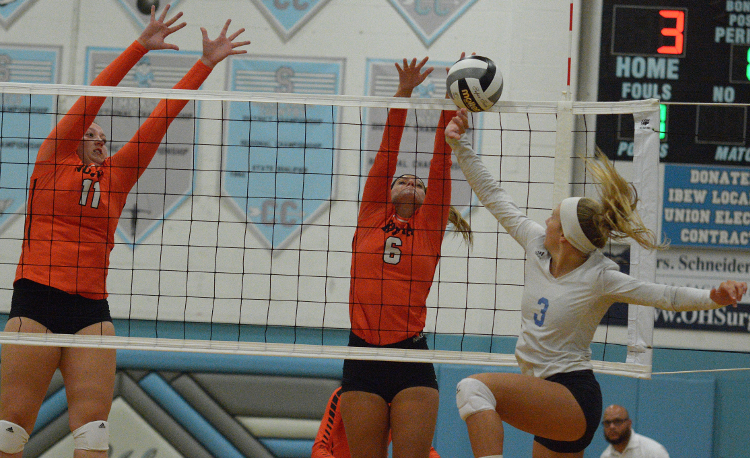 WILLOUGHBY—South apparently learned a lot from its 3-0 setback to Notre Dame-Cathedral Latin on Saturday. The Rebels corrected their mistakes from that first match and defeated visiting North on Tuesday, 3-0.

“We actually played very well in the second and third set (in the loss to NDCL), it was just that first set and you saw it again today against North,” said South coach Bill Behrend. “Those nerves in the first set affect you but we needed to get a win.”

North hung with the Rebels in the first set as the longtime rivals traded points until South used a 7-0 run to break open what was an 8-8 tie.

Margo Huff and Brenna Yerse led the charge for the Rebels in pulling away from the Rangers. Huff finished with a match-high 12 kills while Yerse hammered home 10.

“We have a one-two punch with (Huff and Yerse) and we throw our other two tall middles in there with Isa Luciano, another senior, and Jessie Ceboll, another senior, and that gives us a well-rounded attack,” Behrend said. “We can have those two putting the ball away and then if we can get blocks out of everybody else it’s an offense that has the potential to be very dangerous if we can get the passing that we need.”

Sarah Miozzi led the Rebels with 38 assists and Kenna Matriano recorded 12 digs in the win.

South jumped out to a 22-7 lead in the second set before the Rangers went on a little run of their own.

Unfortunately for the Rangers, their runs were few and far between.

“We need to work through our adversity and just make those short runs into longer runs and put the ball down quicker,” said North first-year head coach Samantha Muzic. “We kind of let teams stay in it too long. We got the nerves out. Starting the season here at your rival, it’s going to be nerves. Any team can win at any given time so you have to be ready.”

“We just have to work on our blocking,” Muzic said. “Our block kind of struggled and that didn’t help us defensively. We have to work on closing that block and reading and that should help us out.”

South travel to Riverside on Thursday while North hosts Mayfield.