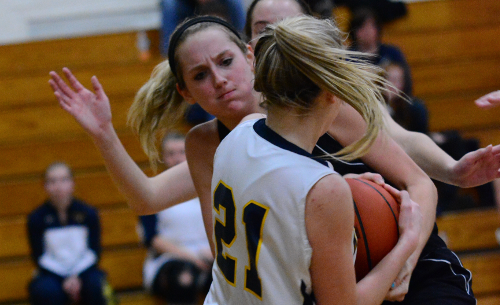 KIRTLAND—South jumped out to an early lead and later held a double-digit lead over host Kirtland but settled for a 50-46 win on Monday. Each time the Rebels tried to pull away the Hornets would work their way back into the game.

“We played a much better second half than we did in the first half,” said Kirtland coach Bob Bell. “It really just boiled down to making shots. The kids played hard, we didn’t play particularly well, but it was a strong effort.”

“Sam played exceptionally well considering the fact that they focused their best defensive player on her all night long,” Bell said. “We tried to help her out as much as we could by setting some picks. She did a lot of good individual stuff getting down the lane and just getting free.”

The Rebels then used three 3-pointers to go on a 9-2 run to open the second quarter.

Lauren Blasinsky, Sydney Merk and Morgan Hodge all connected from behind the arc for the Rebels to push South’s lead to 22-13 early in the second. The Rebels led 32-23 at halftime.

The Hornets won the third quarter, 8-4, mostly with its outstanding defense and better ball control.

“We had a lot of turnovers in the first half and corrected that and took care of the ball much better in the second half,” Bell said. “We were just trying to move the ball against the different defensive looks they were playing. They were playing Sam really tight so we were trying to send some picks out to free her up some and then run our normal offenses to get shots.”

Kirtland used a 6-0 run midway through the fourth quarter to tie the game at 39 but the Rebels would hit their foul shots to hold off the Hornets down the stretch.

“We just couldn’t get over that hump,” Bell said. “South has got some really nice players there. They’re a mature team. They’re big and that created some real problems for us inside, which I kind of anticipated. They’re a very good team and play a tough schedule. We were going to have to play a lot better than we did tonight to win.”

Merk led South with 16 points and Blasinsky and Kayla Zarbock both contributed with 10.

Sydney Snyder scored 12 for the Hornets.

“She came up with some big shots,” Bell said. “She does find a way to get them. She works real hard offensively to get those shots. She managed to get double figures for us.”

Claire Neibecker and Deanna Ponzani went scoreless for the Hornets but they both played exceptionally well inside against South’s height advantage in the post.

“Claire plays good defense. She works hard all the time,” Bell said. “It was real hard for Claire and Deanna to score in there because they were going against much taller defenders. It obviously showed in that case because we just didn’t get any scoring on the inside tonight.”

Kirtland dropped to 9-7 on the year. The Hornets host Cardinal on Saturday.