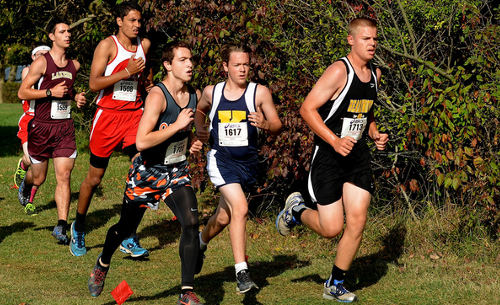 MIDDLEFIELD—Held late in September each year, the Cardinal Invitational often greets runners with a wet, sloppy course, which results in slow times.

That wasn’t the case on Saturday and the Kirtland Hornets took advantage of the dry conditions. The Hornets’ boys and girls combined to set 10 lifetime and three season best times.

“Usually you know that Cardinal is going to run fast as long as it’s a nice day but it’s been muddy and wet a lot of times so we don’t get to get on that nice flat, open course on a really nice day,” said Kirtland coach JP Moran. “We did today so I stressed that with the kids. I told them this is the course you could get your PR on. It was really nice because we’re off next weekend and then we have the Legends Meet and then it’s off to districts.”

“We had four lifetime PRs from the boys. Three of them were freshmen, but Colton had a big PR for him and he was our No. 1 today,” Moran said. “The girls had six lifetime PRs and two season PRs. We almost put all top five girls under 25, which would have been a big accomplishment for us and our No. 2 girl, Andrea, got in the 23s. That was pretty big.”

Zanko finished 29th overall to lead the Kirtland boys to a ninth place finish while Christine Walsh (22:42) was 23rd in the girls race to help the Hornets finish in eighth place. Zoe Gregory finished in 31:15.

“Christine is a little banged up but she still ran a good time,” Moran said. “Her foot is hurting her and you could tell it was bothering her.”

Kirtland has the weekend off before hosting Newbury and Grand Valley on October. 6. The Hornets will then compete in the Legends Meet.

“I was really excited to have these times going into October,” Moran said. “It’s good to see them progressing.”