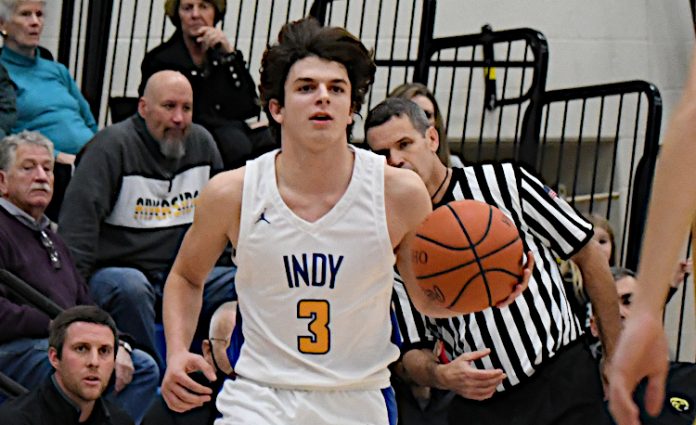 Kyle Zygmunt scored a game-high 25 points and set a second school record in leading Independence to a 69-58 nonconference win over visiting Fairport Harding on Friday.

Zygmunt, who earlier in the week broke the school record for steals in a career with 148, was one of three Blue Devils who scored in double figures against the Skippers. He also moved to the top of the list in career assists with 308.

“It feels great to leave a legacy behind me,” Zygmunt said. “I hope to motivate some of the younger guys to keep working hard and grow the program.”

Aidan Coljohn scored eight of his 17 points in the first quarter and Zygmunt added seven to spark the Blue Devils to a 25-14 lead after eight minutes of play.

Landon Jatsek added five of his 15 in the period.

“We came out of the gate and didn’t have a turnover in the first quarter and scored 25 points right away,” said Independence coach Kyle Johnson. “That hasn’t been in our DNA this year, starting games fast. We were able to do that tonight.”

The Blue Devils rode that momentum to their second win of the season and snapped a two-game skid.

“That was huge,” Johnson said. “We needed a ‘W’ for our confidence moving forward. We’ve got some younger guys and they have been hanging around and it’s good for them to get some varsity experience against some really good teams, but I think in the long run this little stretch will help us.”

Independence led at halftime, 35-24, and then played even with the Skippers in the second half.

In addition to the three in double figures, Braden Flynn added seven points and Sam Crooks finished with five.

“It felt great that we finally got a team win,” Zygmunt said. “Aidan is making a big impact for us by shooting very well. Braden has been a great presence down low by getting boards and getting some big put-back points.”

“Aidan did a much better job of attacking off the dribble tonight and he was inside getting rebounds and playing around the rim as well as knocking down some 3-pointers for us,” Zygmunt said. “Kyle does it all for us. He’s just a great all-around basketball player. I don’t have enough nice things to say about the kid. He’s really matured in the last three years and has become our vocal leader. He’s helping the young guys and getting them to where they need to be.”