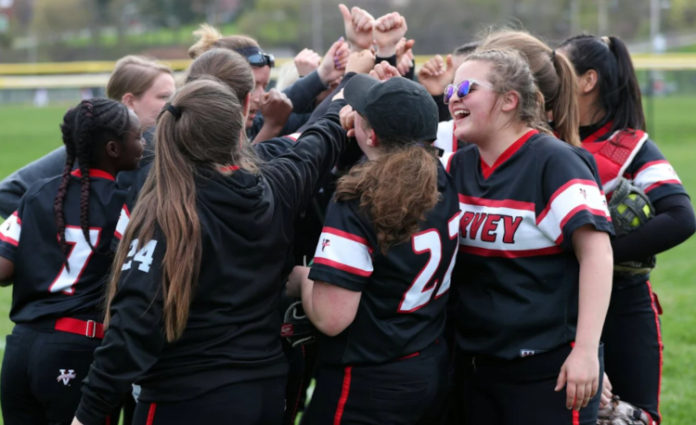 The Harvey Red Raiders opened the preseason focused on building off the improvement the team showed during the 2019 season.

With five starters back from that squad, which finished 8-14 overall and 4-10 in league play, head coach Betsy Hada and the Red Raiders have the CVC Chagrin Division title in their sights.

“We have expanded our roster with some quality young players,” Hada said. “The combination of veterans and newcomers will make us a force to be reckoned with this year in the CVC. We will rely on veteran leadership to navigate uncharted waters while calling upon new faces to fill in a few holes.”

As was the case with every other team in the area, the unique offseason presented challenges for the Red Raiders.

“The offseason for our team was business as usual,” Hada said. “My team has treated the preseason just like they have every other year, one with one purpose in mind–to get better every day. We do not let obstacles get in our way. I think we have a core group of highly motivated, talented athletes that will lead us as we head into a unique season. Our players have done a fantastic job of facing each bit of adversity thrown at them and I look for that to continue throughout the season.”

Harvey’s strengths lie in each player’s ability to step into nearly any position on the field to fill a hole when needed.

“It allows everyone an opportunity to contribute in a way that best suits the team’s needs in a given game, which helps us gain the upper hand over our opponents,” Hada said. “The versatility we will bring to the field comes from the hard work and dedication that everyone associated with the program has put in, both on and off the field during the last year and a half.”

Leading the way for the Red Raiders is Tressa Overbey one of three seniors projected to start.

Overbey, a centerfielder, batted .458 with a .567 on-base percentage in 2019, and she also was safe on all 20 of her stolen base attempts and scored 17 runs. She earned first-team All-CVC and honorable mention all-district honors.

“Tressa will return to the outfield this season after a successful sophomore year campaign,” She will be a spark at the top of our lineup and be a considerable threat on the base paths.”

Junior Rachael Boykin returns to pitch after earning honorable mention all-conference and all-district honors as a freshman. She hit .431 with a .615 slugging percentage with 10 doubles, one triple, 27 runs batted in and she scored 17 runs.

“Rachael is not just a great pitcher; she plays a solid first base and packs a punch at the plate,” Hada said. “I expect big things out of Rachael this spring.”

As a freshman, she batted. 317 with a .483 slugging percentage and five doubles, one triple, one home run, 25 runs scored, and she knocked in 15 runs. She earned honorable mention all-conference honors that season.

“Mira will be splitting time between shortstop and catcher this spring,” Hada said. “She has a strong bat and will be hitting clean-up for us.”

The rest of the starting lineup is made up of sophomores Lola Thomas behind the dish, Alexa Bailey at second, and Nya Talley in left field.

“The only obstacle holding us back this season is our lack of experience playing together on the field together as a unit,” Hada said. “We have the athletic ability and team-first mentality to put Harvey back on the map. We will improve that every turn as the season progresses. Do not underestimate us this year.”

Bailey and Cruz also will throw some innings for the Red Raiders this season.

“My pitching staff is well-rounded and complements each other with a variety of pitches and changes in speed,” Hada said. “ Rachael Boykin returns for her junior year campaign after throwing the bulk of the innings for us in 2019 and established herself in the CVC. Senior Keristin Cruz has worked diligently to improve in the offseason and will be a key reliever for us this season. Sophomore pitcher Alexa Bailey will make an immediate impact. She brings a bulldog mentality to the position and spins the ball well.”

Hada is confident her team has the talent and drive to compete this season. Success for the Red Raiders hinges on their ability to stick to the game plan and to overcome any adversity they face.

“Every season is different, and I am excited to see who seizes their opportunity to contribute,” Hada said. “We have all of the pieces. It comes down to execution and handling any unexpected bumps along the way.”

Kirtland hangs on for win at Independence