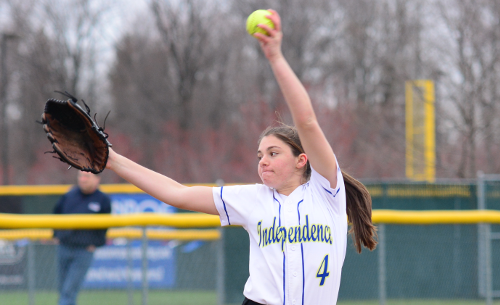 Independence freshman Kim Rega might have expected to be pulled late in the Blue Devils’ 4-1 win over visiting Kenston on Wednesday. Rega was in a similar situation last week when she replaced by senior Victoria Sirna in the sixth inning of a 2-2 tie at Kenston. The Blue Devils went on to win that game, 3-2, in extra innings.

This time, it was all Rega as she earned the trust of head coach Garry Moore.

“She had to prove to herself that she could finish a game,” Moore said. “She had to earn that trust and she did.”

Rega allowed one run on three hits in the first inning then shut down the Bombers the rest of the way. She gave up just two more hits and struck out four in the complete game victory.

The Blue Devils, who improved to 8-2 overall and 4-1 in Chagrin Valley Conference play, helped Rega with an outstanding defensive performance and clutch hitting at the plate.

“The defense was awesome behind her,” Moore said. “Larissa Adams, Sophia Trombetta, they both made some really good plays in the outfield and Nora Baran at third base had probably five assists. A good pitcher has to throw strikes and she threw strikes.”

Rega also helped herself by coming up with two big at bats.

She led off the bottom of the third with a single and tied the game on a double by Adams. Then, with the Blue Devils leading 2-1 in the sixth, she doubled and scored on a single by Nicole Ferrara.

Mallory Trombetta singled in the fourth and scored on a base hit by Maggie George.

Ferrara ended the game 2-for-3.