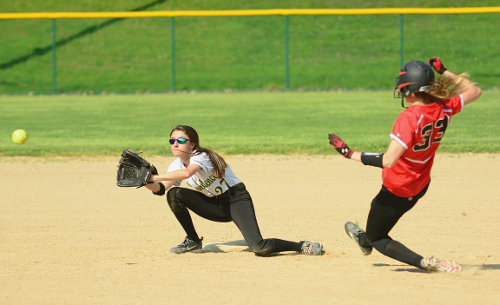 VALLEY VIEW—Independence freshman Kim Rega was thrust into the starting lineup when starter Victoria Sirna, a senior, suffered a finger injury in pregame warmups against West Geauga on Tuesday.

The Redskins pulled out the 3-1 win but Rega proved she has the mental and physical tools to succeed Sirna, who led the Blue Devils to the Division III regional championship game last year.

“A star is born,” said Independence coach Garry Moore. “Little freshman Kimmy Rega came in here and looked like she’s been pitching for four straight years against the defending state champions. Hats off to them; they beat us but we know deep down inside you take the best hitter and best pitcher off our team and we have a bit of a setback. This team didn’t quit. They battled to the end and I’m proud of them.”

Rega walked Cuyahoga Heights leadoff hitter Lauren Goetz to start the bottom of the first. Goetz stole second and third but Rega struck out the next four Redskins to keep the game scoreless. She went on to allow just four hits, one earned run and she struck out eight.

Thanks to her confidence, Rega pitched herself out of several jams to keep the Blue Devils in the game.

“I was thinking like it was any other game,” Rega said. “It was a normal game. I didn’t think anything of it.”

Selena Colon had an RBI single in the second to pick up the Redskins’ only earned run of the game. The Redskins added two unearned runs in the bottom of the fourth to make it 3-0.

“That hurts. Defense wins ball games,” Moore said. “We know that but that’s part of the game. You’re going to make errors. Our girls still fought to the end.”

Independence got one back in the fifth when Sophia Trombetta was hit by a pitch, stole second and scored on Nicole Ferrara’s RBI single. Independence left two runners in scoring position in the inning.

Cuyahoga Heights used a walk and an error to put runners at the corners in the bottom of the fifth but again Rega got out of the inning. This time she got some help from the defense when a hard ground ball took a hop off third baseman Nora Baran’s shoulder and shortstop Katie George was there for the rebound. She fielded the ball and threw it to first base to get the final out of the inning.

The Blue Devils again stranded a pair of runners in the sixth and went in order in the seventh to close out the game.