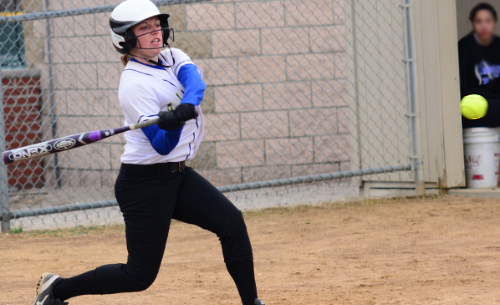 Everything is beginning to click for the Independence Blue Devils as they wind down the regular season and eye another deep run in the playoffs.

Freshman Kim Rega and senior Victoria Sirna combined to lead the Blue Devils to a 6-2 win over visiting Wickliffe on Thursday. Rega started and pitched 3 1/3 innings and Sirna shut down the visitors the rest of the way.

“My freshman pitcher after a tough first inning settled in really well,” said Independence head coach Garry Moore. “She gave up two runs on four hits in the first inning and we brought Vic in to see how she was going to respond after (Wednesday’s) game. We wanted to go back-to-back with her but not in a complete game.”

Independence scored on in the bottom of the first to cut Wickliffe’s lead in half then jumped out to a 4-2 lead with three in the fourth and added two more in the fifth.

Sirna relieved Rega midway through the fourth with two runners on and one out. She shut Wickliffe down in order to preserve the lead.

“What she does, she does well,” Moore said. “She has to continue to do the things she does well. She’s a bunter and a slapper and she got three base hits.”

“Halle Dorko is finally starting to put together back-to-back games with hits and she’s making adjustments and doing things different to get base hits,” Moore said. “Larissa Adams continues to do what she’s supposed to do.”

Wickliffe dropped to 15-2 on the year. Emily Lesco allowed just seven hits in the loss.

“That’s a well-coached team,” Moore said. “That little freshman pitcher they have did an outstanding job against us.”

Cuyahoga Heights will take the weekend off to gear up for five games in five days. They play at Perry on Monday, host West Geauga on Tuesday and travel to rival Cuyahoga Heights on Wednesday in a game that could decide the Chagrin Valley Conference Chagrin Division championship. They close out the week with home games against Villa Angela-St. Joseph and Garfield Heights.