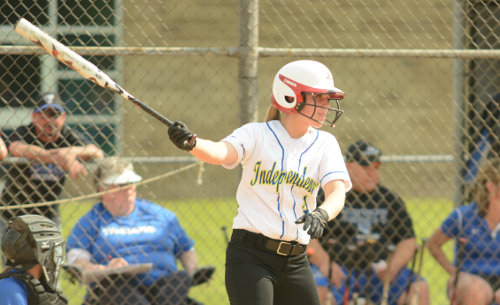 Independence got two dominating pitching performances in back-to-back wins at Disney’s Wide World of Sports in Orland, Fla., on Tuesday.

Freshman Kim Rega struck out 10 in five innings and Victoria Sirna shut down the last six batters in a 7-5 win over Verona (WI) then Sirna nearly threw a perfect game in a 12-0 win over Mount St. Joseph (PA) in the second game of the day.

Independence scored three runs in the first inning against Verona to help Rega shake the nerves of appearing in her first varsity game.

“I tried my best not to be nervous, but of course I got butterflies my first few pitches,” she said. “After I got into my rhythm I wasn't nervous and just had fun. Victoria Sirna really helped to encourage me from first base and keep my nerves at ease.”

Independence coach Garry Moore wasn’t sure what to expect out of Rega in her first start but he knew she had the potential to shine.

“That team from Wisconsin, 1-9 they were loaded,” he said. “We saw them (on Monday) beat (Notre Dame-Cathedral Latin) pretty handily and we threw Kim to the wolves. That freshman shut them down with 10 strike outs and one walk.”

Adams finished 2-for-4 with four runs batted in and Rega and Ferrara both had two hits.

Sirna had little trouble with Mount St. Joseph in the second game. She allowed a two-out walk in the seventh inning to spoil her bid for a perfect game. She was also 2-for-4 at the plate with two doubles.

Junior first baseman Mallory Trombetta had a big game for the Blue Devils as she finished 3-for-4 with three RBI. Trombetta, a standout on the Independence volleyball team, hasn’t played softball since she was in elementary school.

“She doesn’t even understand the lingo yet so we have to break everything down to simplest terms,” Moore said. “She had three singles and she would have been 4-for-4, she dropped down a perfect bunt but she slipped coming out of the batters’ box. She just gets it. She’s raw but she gets it.”

Dorko was 3-for-4 and Ferrara and Adams both had two hits for the Blue Devils, who improved to 3-0 on the year. The Blue Devils have the day off on Thursday before closing out their spring break trip on Thursday against New Jersey’s Egg Harbor High School.