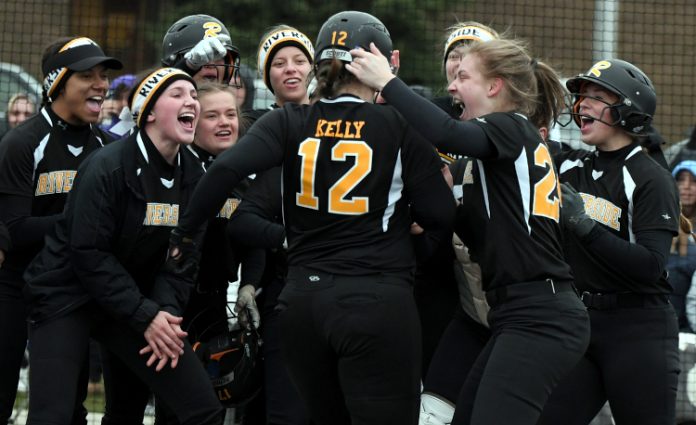 Riverside’s magic number is one after Friday’s 6-1 win over visiting Mayfield in a Senior Night showdown.

The Beavers need a win over Madison on Saturday to earn a share of the Western Reserve Conference title followed by a win over North in the second game of the split doubleheader to win the league title outright.

“It was great,” said Riverside coach Bill Ross of the Senior Night win. “I give the seniors a lot of credit and the team for just staying focused today. Whenever you have senior night, there are a lot of things going on and I thought the girls did a great job of focusing when it was time to play the game and we came out on top with a win.”

Senior Grace Fisher her did her part by quieting a potent Mayfield lineup.

“She was locating her spots,” Ross said. “She pitched well today and she’s getting back into form of what we’ve seen from her in the past. She was throwing hard and hit her spots and kept them off balance.”

Fisher allowed one earned run on four hits and struck out 12.

“Senior Night is always such a fun game and full of emotions,” Fisher said. “After the senior festivities, we stepped on the field and refocused on playing our game of softball. Being locked in and focused really seemed to help me tonight, along with moving the ball around the plate and keeping my velocity up. My key to success has always been going in the circle and blocking out distractions, whether there are runners on base, the opposition in the other dugout, or people in the stands.”

The Beavers took a 1-0 lead in the bottom of the second when Maren Kelly led off with the first of her three doubles and scored on Allison Buttari’s RBI double.

Riverside posted five runs in the fourth with the big hit coming off the bat of junior Delaney Keith.

Kayla Bobeczko singled to start the rally and Megan Lehner drew a one-out walk. Milana McCaleb singled to load the bases for Keith, who stepped up to the plate with two outs. Emma Kovalchuk then singled to increase Riverside’s lead to 2-0.

Keith stepped into the batter’s box hoping to do whatever she could to send her seniors off on a positive note.

“It was a very emotional night,” she said. “I have played with this group of seniors since I was 10 years old and it was really important to pull through a win for them. Getting that hit helped us put more runs on the board.”

Down 0-2, Keith fouled off a ball and worked the count to 2-2 before pounding a ball over the left-field fence.

“Being down with a 0-2 count with two outs with the bases loaded, I knew I had to get some runners in,” Keith said. “My plan at the plate was to stay aggressive and put the ball in play wherever I can. Then that high strike came in and I knew I had to take advantage of it.”

Mayfield manufactured a run in the top of the seventh on an Ella Shaffer double, an Emily Daedlow single, and a Shannon Ramacciatti fielder’s choice.

Kelly led the Beavers at the plate as she finished the game 3-for-4 with three doubles and a run scored. McCaleb and Kovalchuk both recorded two hits and Keith knocked in a team-best four runs.

With the win, Riverside improved to 17-2 overall and 9-0 in the WRC. The Beavers host Madison and North in a split doubleheader on Saturday.