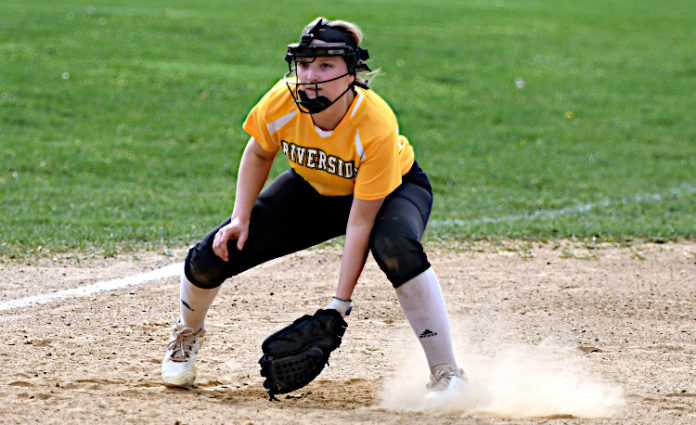 Entering Tuesday’s conference game against visiting Mayfield, the Riverside Beavers have been tested in just two of nine games this season.

Make that three times after Riverside was held to a season-low four runs in a 4-2 win over the Wildcats.

“This was a close game,” said Riverside coach Bill Ross. “The credit goes to Mayfield, they came ready to play. (Mayfield pitcher) Emily Graves threw a good game. It’s good experience for our girls to play in these close games and have to finish games. It will help us as we get deeper into the season.”

Mayfield took a 1-0 lead in the top of the first on a walk and a single but the Beavers responded with a three-spot in the bottom half of the inning.

Megan Lehner singled to lead off the rally and Emma Kovalchuk was hit by a pitch. Amanda Kolar then singled home Lehner to tie the game and Emily Lamos walked to load the bases with no outs.

Delaney Keith singled home two runs to give the Beavers a 3-1 lead.

“Getting three runs in the first inning was huge for us, especially after giving up a run in the top of the inning,” Ross said. “It’s always important to try to keep momentum on our side and getting those runs did that.”

Mayfield had two runners reach on errors in the second inning but Riverside starter Grace Fisher pitched out of that jam.

Fisher picked up the win after allowing just one run on two hits with seven strikeouts in six innings of work.

Maren Kelly led off the Riverside fourth with a double. Katie Ross then hit a one-out single and Fisher walked to load the bases but Graves recorded the final two outs to keep the score 3-1.

Riverside added an insurance run in the fifth.

Kolar jumpstarted the rally with a single and Lamos doubled her home.

Lamos replaced Fisher in the circle to start the seventh inning and despite the Wildcats trimming their deficit, she closed out Riverside’s tenth straight victory.

“Mayfield never quit,” Ross said. “Give them credit. Grace Fisher threw a good game, but it was huge for Emily Lamos to be able to come in for the seventh inning and seal the win. Those two pitchers work so well together and root for each other every time. There is great chemistry between them.”

Lamos struck out the first batter she faced then allowed three straight singles that cut Riverside’s lead to 4-2.

Angeleah Saltenis hit a fourth straight single but the Beavers forced out the Mayfield runner heading to third for the second out of the inning and Lamos coaxed a groundout of the next batter to seal the win.

“Pulling through the tight victory showed us that even though we struggled at times we were able to lean on each other to get the job done,” Lamos said. “Going into the seventh inning, I was ready to step in because I always have her back and I know she has mine; that’s the beauty of pitching depth. I wasn’t looking to do anything crazy coming in, I just wanted to help my team out and close the game and with good defense, we got the job done.”

Kolar and Keith both recorded two hits for the Beavers while Saltenis had two for the Wildcats.

Riverside travels to Mayfield on Wednesday to close out the season series.

Riverside back for more