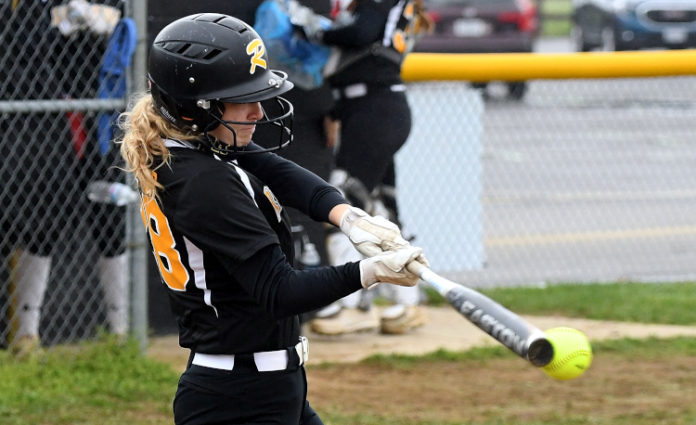 Riverside scored all seven of its runs in the final two innings to beat host North on Tuesday, 7-3.

The Rangers led 2-0 when the Beavers rallied for three runs in the sixth and four in the seventh in improving to 20-2 on the year.

“You could definitely see the rust on the girls,” said Riverside coach Bill Ross regarding his team’s six-day layoff due to weather cancelations. “We knew we had to get back in game shape with the playoffs looming and having a six-day break, so it was really important to start stringing some hits together as the game wore on.”

North, who also had a six-day layoff, got things started in the second when Amanda Dobida singled and moved to second on Dori Siekaniec’s one-out walk. Adri George reached on an error to load the bases for Jess Dodd, who hit a two-out, two-run single.

The score remained the same until Riverside scored three runs in the sixth.

Until then, Dobida had kept the Beavers in check.

“I think the key was just settling back into a groove,” Ross said. “Amanda Dobida did a great job of keeping us off-balance, but as the game progressed, the girls focused in and started hitting the ball harder, which gave them confidence.”

“Amanda absolutely dominated tonight,” said North coach Taylor Braddock. “Although she took the loss, she showed heart and determination in every pitch. Even when the defense behind her is shaky, she doesn’t break or show any emotion. She just continues to pitch her game and that’s huge for a freshman.”

Lehner’s single created the momentum the Beavers needed to climb back into the game.

Amanda Kolar and Emily Lamos both reached on an error with one out and then Delaney Keith and Maren Kelly hit back-to-back singles to give the Beavers a short-lived 3-2 lead.

North tied it in the bottom half of the inning when Emily Zaleski led off with a single and scored on an error.

“The girls fought to get the lead and then to come back and tie it up was big for them,” Braddock said. “We just came up short in the end.”

Kayla Bobeczko’s pinch-hit double to lead off the Riverside seventh sparked the Beavers to a four-run inning.

Lehner followed with an RBI single and Emma Kovalchuk reached on an error. Kolar singled home Lehner and Keith also had an RBI single in the inning.

Emily Lamos allowed two hits in the bottom half of the inning but she pitched out of that jam to earn her 10th win of the season.

She and Grace Fisher became the first Riverside duo to each win 10 games in a single season.

“It’s been great to be able to pitch Emily and Grace every other game,” Ross said. “The team has great confidence in both those girls and being able to keep them as fresh as possible has been huge for us. They really are a great pitching duo.”

Kovalchuk led the Beavers with three hits. Lehner, Kolar, Lamos, and Keith each finished the game with two.

Dodd was 2-for-4 for the Rangers and Dobida allowed just three earned runs on 10 hits and she struck out four.

“It was nice to play a solid team in Riverside the day before our first playoff game,” Braddock said. “The girls know what needs to be done in order to win and advance in the postseason. They have to come out tomorrow and work hard all seven innings in order to extend their season.”

Riverside hosts Mayfield on Wednesday in a Division I sectional final while North will entertain Uniontown Lake.