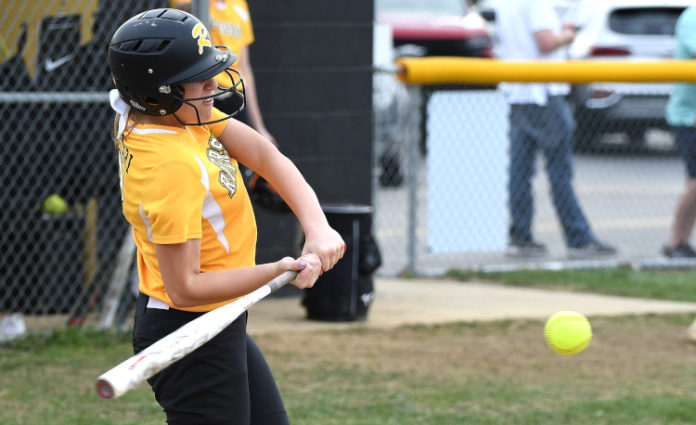 The Beavers hit three home runs and four doubles in running their record to 11-0.

“The saying that hitting is contagious definitely runs true for our team, especially today,” said Emily Lamos, who sent two balls over the outfield fence. “Our team has such good chemistry and we are full of energy, so it’s nice to be able to feed off of that when I am in the box.”

Riverside started the hit parade early as Megan Lehner led off the first inning with a single and Emma Kovalchuk doubled. Amanda Kolar was hit by a pitch to load the bases and Delaney Keith hit a one-out single to give the Beavers a 1-0 lead.

Kolar scored on a passed ball and Maren Kelly grounded out to score another run. Katie Ross then reached first on a dropped third strike that allowed Keith to score. Grace Fisher doubled and Kayla Bobeczko hit an RBI single to make it 5-0.

The Beavers added four more in the second on doubles by Kelly and Bobeczko and singles from Lamos, Ross, and Fisher.

An error and a single allowed Lake Catholic to cut its deficit to 9-1 in the bottom of the second but the Beavers tacked on three runs in the third and the fourth innings to invoke the run rule.

“I saw the inside pitch coming and I knew I had to take advantage of it since we don’t see many of those in high school ball,” Kolar said. “It felt great off the bat, right on the sweet spot. I got it high in the air to left field and it just went. Once we get hitting, everyone feeds off of everyone else’s energy. That’s a huge part of our offensive success, and it showed today.”

Kovalchuk singled and Kolar walked in the fourth to set the stage for Lamos, who hit a three-run shot.

“Today was my first two home run game and it was so thrilling,” Lamos said. “As a senior who is done playing softball after the season, I cherish every at-bat, and having a multiple home run game just makes the memories that much better.”

Kovalchuk, Lamos, and Bobeczko all finished with three hits for the Beavers. Kolar, Keith, Kelly, Ross, and Grace Fisher each finished the day with two hits.

Fisher also had a big day in the circle as she allowed just one unearned run on two hits and struck out 13 Cougars.