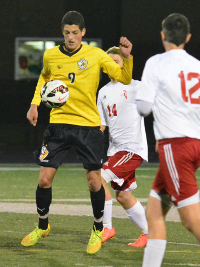 TWINSBURG—Asaf Roth scored on a first half penalty kick and Michael Dreka pulled off his best Tim Howard impression in goal to lead Beachwood to a 1-0 win over Badger in a Division III, Region 9 semifinal at Tiger Stadium on Wednesday.

The win was a school-record 14th for the Bison, who advanced to Saturday’s regional final against Canfield South Range at Ravenna.

“I’m most proud of the way my defense stepped up and neutralized a team that scored a heck of a lot of goals,” said Beachwood coach Brian Greene, who was a player the last time the Bison advanced to the regional soccer tournament. “We didn’t let them get started. That’s a testament to our team and the way we play.”

Badger had outscored its opponents 109-8 this season but had its hands full with the Bison in the first half.

Junyoung Lee darted in and out of the Braves’ defense and nearly found Shai Yulish, Beachwood’s single season scoring leader, open in front of the net in the sixth minute. Yulish put two shots on a goal within the next two minutes but Badger Keeper George Kirby denied him both times.

Three minutes later, Lee was taken down from behind in the box to set up Roth’s penalty kick.

“We did what we always do, we were getting the ball wide and we got it deep to Junyoung on the left side,” Greene said. “He brought it in and cut the ball back when he was in the box and the defender was late and Junyoung went past him and he swept his leg and it was a PK. Asaf stepped up and buried it.”

The Bison then stepped up their attack.

Roth fired off a laser shot that Kirby punched away and Matthew Stovsky just missed on a rebounded shot. Roth had three more scoring opportunities but one sailed wide and Kirby blocked the other two. Lee also had a shot on goal but Kirby was there to keep Beachwood from increasing its lead before halftime.

“I thought we were all over them in the first half,” Greene said. “We were unlucky not to have a few goals. I was looking for a little more out of them in the second half but you’ve got to credit to the other team. They came ready to play. It was a regional semifinal for them too. They weren’t going to let us have anything easy. They were going to force us to work.”

Badger had all the shots in the second half.

Joe Gorospe twice went one-on-one with Dreka and came up empty. Dreka made a jumping save on the first and dove to his right to knock away the second shot.

“Michael stepped up,” Greene said. “He’s a senior and he’s been waiting for his chance to shine and kept us in it. That’s what we count on him for.”

Dreka finished with four saves. Kirby had seven for the Braves.

Badger finished the season at 18-2. Beachwood improved to 14-4-2 heading into the Elite Eight on Saturday.

Greene isn’t worried about his team’s focus for the biggest game of their careers. Instead, he’s hoping their youthful approach will keep him from getting the butterflies.

“They keep me focused,” he said. “I’m the one that gets nervous. They’re just singing songs and having fun. They just want to play. If we make it to the state finals they’ll be like, ‘Who do we play next coach?’ They’re young and they don’t worry about what they’re accomplishing or what they’re doing, they just want to keep playing. We’ll just see how far we can take it.”