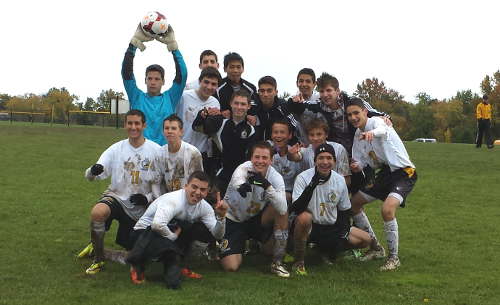 Gilmour Academy found a way to slow down Beachwood scoring leader Shai Yulish. Unfortunately for the Lancers, Asaf Roth had a career day to lead the Bison to a 5-1 win in a Division III district semifinal at Beachwood on Tuesday.

Roth scored four goals to push his season total to 21 and Vonya Shiffman added another for the Bison, who will host Kirtland in the district championship game on Saturday.

“Asaf took over the game,” said Beachwood coach Brian Greene. “He scored four goals and two of them were (penalty kicks). We were passing the ball around and they were very aggressive in the box. It was wet and slippery in there and they knocked some guys down from behind. He stepped up and buried two of the PK’s.”

His first gave the Bison a 1-0 lead in the fourth minute. Gilmour’s Jack Sullivan scored a minute later to tie the game.

That score held until the 47th minute when Roth scored off an assist from Bogatur Askaryan then added his second penalty kick two minutes later.

In the 71st minute, Griffin Celleghin found Roth open in front of the net and served up a perfect pass to make it 4-1. Shiffman scored two minutes later to seal the Beachwood win.

“In the last 20 minutes of the first half we were all over them but the ball was ricocheting off and I thought we were unlucky to not get more out of it,” Greene said. “The second half, the boys buckled down and took over the game. Even as muddy and wet as it was we were stringing passes together.”

Roth scored the goals but Greene credited the play of his midfield, specifically Askaryan, Matthew Stovsky, Yuval Zamir, Junyoung Lee and Shiffman, for their efforts in feeding the goal scorers.

“This game was won by the midfield,” Greene said. “They worked their tails off getting up and down the flanks and getting the ball wide under difficult conditions, to say the least. It was raining the whole game and muddy. Junyoung Lee had a great game too. He drew six or seven fouls where he dribbled the ball and guys just took him out. They were all solid.”

Gilmour never mounted much of an attack in the second half.

“The guys on defense did their job too,” Greene said. “They had to watch for the counterattack and not let the ball bounce around. Griffin Celleghin and Adam Ratner and Cameron Krantz all had nice games and Max (Babbush) just anchored the whole thing. He was completely in control, moving the defense around and quarterbacking the defense.”

Michael Dreka recorded for saves in the win.

“Fortunately for us, he didn’t have to be much of a factor,” Greene said. “He was pretty aggressive. Anytime they tried to get out over the top he was out there and cleared the ball really quick.”