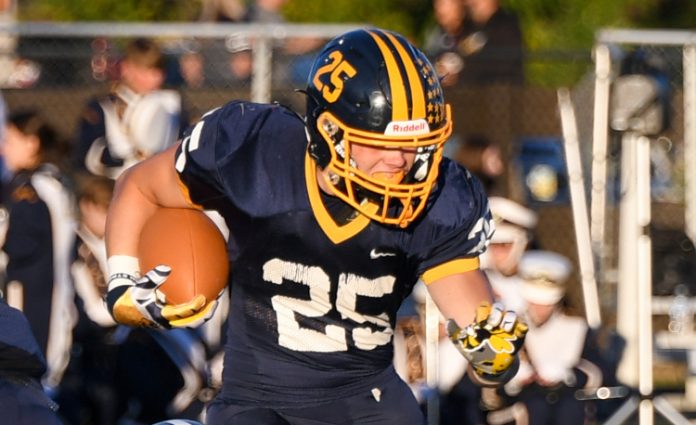 Mason Rus ran for 192 yards and scored three touchdowns in leading Kirtland to a 37-7 win at Geneva on Friday.

With the win, the Hornets improved to 4-0 overall and extended their winning streak to 45 straight games.

“The offensive line was getting a great push all night,” Rus said. “Our downfield blocking allowed me to find lanes downfield.”

Tommy Gogolin ran for a 45-yard touchdown midway through the first quarter to give Kirtland the early 7-0 lead.

Geneva responded four minutes later with an 11-yard touchdown pass from Wyatt Fuduric to Luke Smith that tied the game at 7-7.

It was all Hornets after that.

“We just needed to bring more intensity from the start and not blow any plays off,” Rus said. “It was a nice wake-up call for all of the guys.”

Johnny Raguz added a 36-yard field goal with three seconds left in the half to push the Kirtland lead to 23-7 at the break.

Rus scored on touchdown runs of 16 and 45 yards in the third quarter to close out the scoring.

Fuduric completed 6-of-11 passes for 53 yards and Brady Peet led the Eagles with 49 yards on seven carries.

Geneva (1-4) hosts Orange on Friday while the Hornets will look to push their streak to 46 straight wins against visiting Chagrin Falls.

“Having such a big streak is a huge accomplishment, yet it is our torch to carry this year and it motivates everyone week after week to get after it in the weight room and play for those who gave us this opportunity,” Rus said.