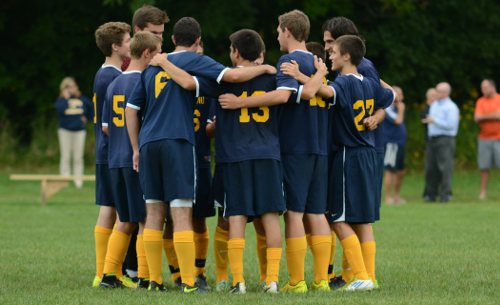 Sabbath, Ianiro team up to lead Kirtland past Gilmour

Kirtland’s Luke Sabbath and Jordan Ianiro teamed up to lead the Hornets to a 3-0 win at Gilmour Academy on Thursday.

Sabbath scored two goals, both off Ianiro assists, and Ianiro added one, off a Sabbath chip shot, to help the Hornets improve to 6-1-3 overall.

“We put Jordan out wide and he beat their defense down the flank and hit two really hard crosses that Luke redirected in,” said Kirtland head coach John Valentic. “Jordan then scored one off Luke when Luke chipped it into the box and Jordan did a good job of holding off the defense. The ball kind of bounced and as it dropped he volleyed it past the goalie from seven or eight yards away. It was good positioning on his part and good strength.”

Gilmour’s record dropped to 4-6-1 but the Lancers are always a formidable opponent.

“They’re never an easy game for us,” Valentic said. “They were really organized in the back. They were going to try to limit our chances and they did. It was 0-0 for a while. We really had to scrap for those goals.”

With Sabbath and Ianiro taking charge of the Kirtland offense, Colin McGreal led the way on defense.

“I give him credit for anchoring our defense and organizing them,” Valentic said. “He’s a huge part of getting that first shutout and solidifying us back there and keeping us in games.”

“He did a nice job to earn his first shutout of the year,” Valentic said. “There weren’t a lot of great shots on goal but he had to come up the line and he played a good game that way. He was being active and winning some dangerous 50-50 balls.”

The Hornets return to action on Tuesday when they travel to Cuyahoga Heights.