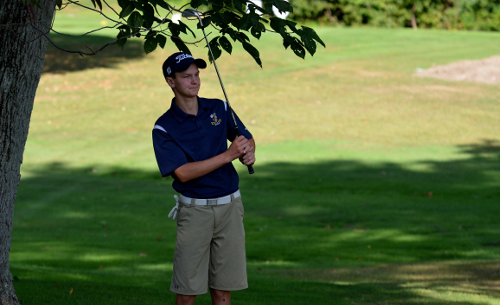 Michael Schnur has his score headed in the right direction as the postseason approaches.

Schnur carded a match-low 34 to lead Kirtland to a 164-192 win over Cuyahoga Heights at Fowler’s Mill on Wednesday.

“Michael has been struggling with his putter for a while,” said Kirtland coach Greg Cosimi. “Today, he made a few putts and it really paid off. Michael played an excellent round. It's early in his high school career, yet he's become a great inspiration to the other players on our team.”

Schnur finished one stroke under par 35.

His teammates weren’t far behind.

Brian Beres carded a 40 and Adam Mueller and Daniel Heimsoth both finished with 45 to close out Kirtland’s scorecard.

“It's great to see Danny shooting in the mid-40s again,” Cosimi said. “He has worked very hard to control his ball flight, and now we're seeing the results.”

Michael Knezevic finished with a 47 and Jack Dever shot 49 for the Hornets.

The Hornets will compete on Sunday in the Notre Dame-Cathedral Latin Invitational at Quail Hollow.