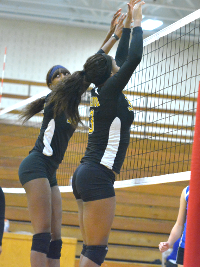 Schoenhagen era at Beachwood begins with a win

The Sarah Schoenhagen era at Beachwood began with a victory, but it didn’t come easily.

Cleveland Central Catholic won the first set before the Bison regrouped and responded with three straight wins to notch their first victory of the year.

“It felt good,” Schoenhagen said. “We still have a lot to work on. We should have won in three in my opinion, but we won, so we can all breathe a little easier.”

“We made a lot of errors,” she said. “We gave them 17 points that game. We had 6 service errors and 11 hitting errors. They didn’t really have to do much work.”

Between sets Schoenhagen calmed her team down and helped the Bison to refocus on the little things they could control.

“We talked to them and told them they had to get it together,” she said. “Energy-wise and their attitudes changed. I’m not sure if they were nervous with it being their first game but the made a lot less errors.”

“It felt good,” Schoenhagen said of her team’s rally to win. “Even in the first game, we were down by almost six and they kind of rallied back at the end. Overall, I’m happy with the first game. We definitely have a lot of work to do to get to where I think we can get to, but it’s a start.”

The Bison host Kirtland on Thursday.