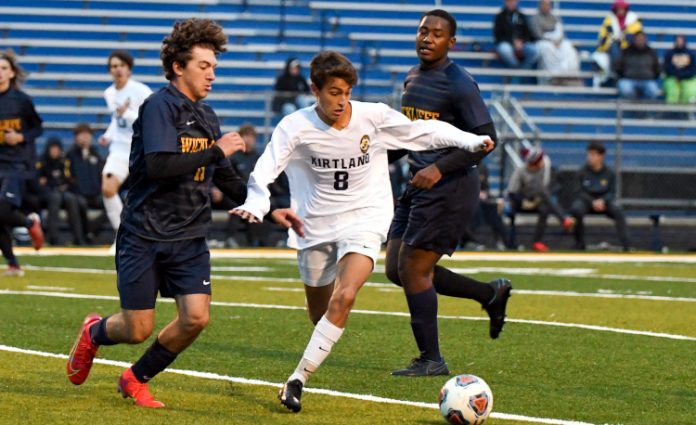 WICKLIFFE—Marco Valentic and Evan Dures each scored four goals in leading Kirtland to a 9-1 win at Wickliffe on Thursday.

“I think the movement off the ball was key,” Valentic said. “With Evan back, we have a good understanding of each other. One guy comes in, one guy comes out and they couldn’t really keep up with all of us so one guy was always free and we found the right guy most of the time.”

Dures returned from an injury he suffered in the first week of the season.

He made up for lost time by scoring his first goal midway through the first half and then he added three early in the second half.

“It was great,” Dures said. “It felt so good to run around and play in a game instead of watching from the bench.”

With three goals from Valentic and four from Dures, the Hornets jumped out to an 8-0 lead before Wickliffe’s Colin Casey drilled a long-range shot into the upper right corner with 19:11 left in the game.

Kirtland’s Anand Sundarajan closed out the scoring with his eighth goal of the season with 5:09 remaining.

Valentic has now scored a team-high 21 goals and also leads the Hornets with 14 assists. Dures is fourth on the team with seven goals, despite playing in just two contests.

Jason de Zwaan was held scoreless against Wickliffe but he has scored 13 goals this season.

“It’s awesome,” Valentic said of Kirtland’s talent up top. “You know whoever is playing the ball to you, you can trust them and you know they’re going to make the right decision and hopefully, get a goal out of it. We created a lot of chances and that’s important.”

Kirtland improved to 8-1-1 overall while Wickliffe fell to 4-5-1. The Hornets travel to Grand Valley on Tuesday while the Blue Devils next plat at Brooklyn on Thursday.