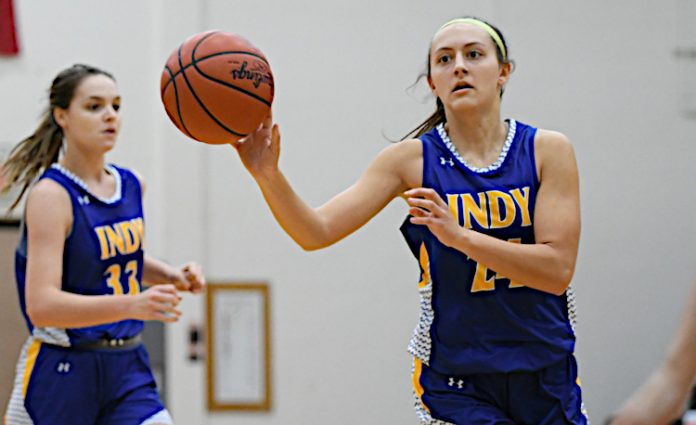 Independence used a second-half run to pull away from host Berkshire in a 47-32 win on Friday.

The Blue Devils, who improved to 4-1 overall and 2-1 in Chagrin Valley Conference play, trailed after the first quarter and led by just four points at halftime.

“I expected it to be a battle just because of the style of basketball they play,” said Independence coach Mike Marcinko. “They’re going to be aggressive and foul you and you’ve got to withstand the pressure and the physicality of the game and we had to deal with that early.”

Berkshire’s Lydia Kastor scored seven of her game-high 17 I the first quarter and Hayley Stoddard added seven of her nine in the opening quarter as the Badgers jumped out to a 14-11 lead.

Independence outscored Berkshire in the second quarter, 12-5. The Blue Devils were 4-for-5 from the free throw line during that stretch.

Berkshire closed out the game 8-of-15 from the free throw line while the Blue Devils converted 15-of-26 tries.

“As the game progressed, we got a little better and kind of toughened up a little bit and fought back and held our ground,” Marcinko said. “I told the girls afterward how proud I was of them because they could have just folded. They could have just taken the punches and not fought back or stood their ground or executed and competed. That’s not the makeup of our girls. I told them they had to toughen up or give in, pick one, and they toughened up and executed and got the job done.”

Balanced scoring and a stingy defense changed the game in the second half.

Anna Weber led the Blue Devils with 12 points and Kara DeSmith and Natalie George both scored in double figures with 10 points each. Alex Adams contributed with seven points and Casey Adams, Ashley Adams, Addie Walker, and Cat Rieger each pitched in with two points.

“In a tough game like this, the chaotic game Berkshire tries to create, you’re not going to be able to run everything you want to run,” Marcinko said. “You’re going to have to play basketball and that’s definitely what Nat and Anna can do and we count on Kara to do that as well.”

Despite her 17 points, Kastor worked hard to get to the hoop.

“Alex did a tremendous job on her,” Marcinko said. “I know she had 17 but she earned it. She had to work hard and she was tired. I just kept telling them, Alex and Casey and Kara took turns on her, that the idea was to wear her down and make her work for every point she gets and I thought they did a great job of that.”