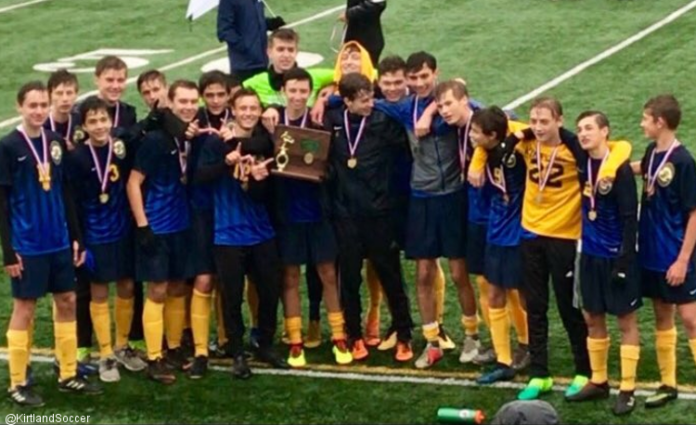 With the win, the Hornets advanced to the regional semifinals where they’ll play Kidron Central Christian on Wednesday at Green High School in a rematch of the 2016 regional championship game.

“I don’t know if it was nerves but it just wasn’t clicking,” Kirtland coach John Valentic said of the slow start on Saturday. “We were a little bit off on either the passes or our positioning. We just couldn’t get anything going. Luckily, our defense was true to form.”

Peter Vukovic gave Kirtland an early lead when he scored in the 12th minute. It remained that way until the second half when the Hornets went on a scoring surge.

“The one goal settled us down a little bit and when the second half started we made one or two adjustments as far as personnel and we seemed to get a better flow and the execution was much better in the second half, obviously,” Valentic said.

Ethan Garcia opened the second half scoring in the 44th minute. Evan Dures scored the first of his two nine minutes later. Dures, a freshman, made it 4-0 four minutes later.

“I put Evan in at the end of the first half with about 10 minutes to go,” Valentic said. “He’s a natural left-footer. He did some nice things and got some crosses off. I kept him in and he let loose a left-footed shot. That was good.”

Josip Mijic-Barisic closed out the scoring in the 58th minute.

“Some other people stepped up,” Valentic said. “I’m really happy about the result.”

Kirtland’s defense kept the Braves from mounting any real challenge.

Tyler Banyasz recorded just one save in goal as the Hornets recorded their 13th clean sheet of the season and third in the playoffs.

“In the back, we were good today,” Banyasz said. “I thought we played as a unit and communicated really well the further we progressed into the match as we have done for most of the season.”

Adding insurance goals in the second half helped the defense to settle in.

“I was thrilled to add a couple more to the tally as in the first half I thought we still were adjusting to the weather conditions and feeling out Kinsman Badger as a team,” Banyasz said. “I thought the minor tweaks Coach V made at halftime to the lineup helped us out offensively too.”

Jeremy Lunka recorded three assists and Mijic-Barisic added one in the win.

The Hornets head into the regional tournament with a 15-1-3 record and riding a seven-match winning streak.

“We are excited to be heading to the regional semis, but we are trying to stay humble and we know of our capabilities and we want to stick to what has worked for us this season,” Banyasz said.