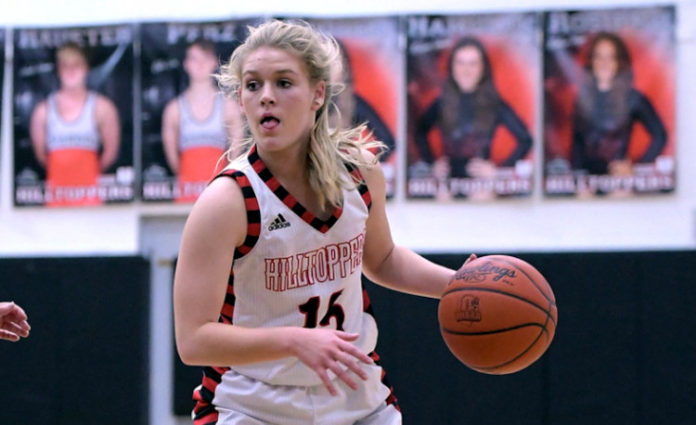 An aggressive defense and opportunistic offense led Chardon to a 27-point second quarter that ultimately helped the Hilltoppers beat visiting Mentor on Monday, 53-42.

The Hilltoppers led after the first quarter, 9-6, before amping up their defensive pressure and turning steals into layups.

“We tried to pick up our pressure a little bit to speed them up and I think that really got us going on the defensive end,” said Chardon coach Cullen Harris. “That helps us to kind of dictate pace and I think our athleticism showed and I think some of our depth showed, being able to go out and turn it up, so to speak, for 32 minutes plays into our strengths and sort of hides some of our weaknesses.”

During that second-quarter siege, the Hilltoppers seemed to respond to any Mentor basket with four and six-point runs.

“They’d make a play or two and our kids responded and reacted,” Harris said. “Part of that is our experience and part of that is I think Saturday’s game was a little humbling for some of us. We did not play our best game against Kenston. We just didn’t do the little things necessary to be successful and Kenston kind of took it to us. If we want to have aspirations to be a really good team, which I think we can be, it’s got to start now. We can’t take games off.”

“Any one of those kids could have been the one to step up and score 15 and that’s ultimately what makes us difficult to play against and I think is going to be our bread and butter going forward,” Harris said. “The flip side of that is when push comes to shove and things aren’t going the way we need, we don’t have that one kid I can say to ‘Go get that ball, go get a score, go create a shot.’ We’ve got to do everything by committee and that’s a blessing and a curse at times but I think a 27-point second quarter really kind of shows what we’re capable of achieving when we put it all together.”

That balanced scoring keeps the Hilltoppers from feeling too much pressure on the offensive end.

“It’s very important having multiple players scoring at all times,” Emily Noerr said. “It’s a lot easier shutting down one player rather than have to guard all five kids on the court. I think that is one thing that makes us a very hard team to guard.”

Playing defense is a lot harder against Chardon when the Hilltoppers are using their defense to create transition scoring chances.

“The team creates a lot of turnovers, which has given me a lot of opportunities to score in transition,” Noerr said. “At the end of the day, winning as a team is what matters the most.”

McCartney’s performance was especially impressive considering she has missed some time this season and is just now settling into her role.

“She’s starting to come around and athletically, she gives us another dynamic and dimension of a long, athletic guard who can push the ball,” Harris said. “I’m really excited for her future.”

Chardon improved to 7-5 on the year. The Hilltoppers travel to South on Wednesday.