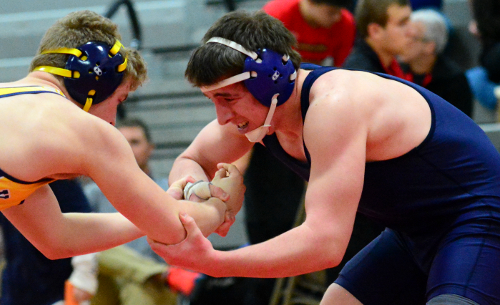 A.J. Senick won an individual title and six other Independence wrestlers earned a spot on the podium to lead the Blue Devils to their first conference championship since 1997 and third in school history.

Independence, which also won a league title in 1968, finished fourth overall at the 2015 Chagrin Valley Conference Wrestling Championship but first in the Valley Division. Perry was the overall winner with 227 ½ points while Aurora (215) and Kenston (181 ½) finished second and third, respectively. Kirtland finished overall and second in the Valley Division with 113 points.

“I was pretty excited,” said Independence head coach Ken DeAngelis. “We knew going into it we had an opportunity to do pretty well but it was going to take all 11 wrestlers we had entered to wrestle as a team and have one common goal. They came through.”

All 11 Blue Devils contributed to the team championship by advancing in either the championship or consolation rounds. In the CVC tournament every point mattered.

“When you’re battling in the CVC tournament against teams like Aurora, Perry, Kenston and Kirtland there are some darned good wrestlers,” DeAngelis said. “They’re not going to hand you anything. We knew we had to go out and take advantage of the opportunity that was in front of us. I thought overall we had a fabulous weekend.”

He received a first round bye then pinned Cardinal’s Bryn Havel and beat Cuyahoga Heights’ Will Hopkins 8-1 in the semifinals. He edged Beachwood’s Josh Bialosky, a returning district qualifier and state-ranked wrestler, 7-5, in the championship bout.

“A.J. has been nothing but consistent all year,” DeAngelis said. “This was his fourth tournament final and second tournament win. He’s just been consistent. In the practice room he works hard, he expects to win and he expects to get better and better. “

Senick scored the first takedown against Bialosky and used a cradle to add three near fall points. He then held off the Beachwood wrestler to win the title.

“A.J. had no doubts at all he was going to win that match,” DeAngelis said. “He went out and got at takedown right away and got a cradle to get a 5-0 lead and just continued to wrestle hard. He had a great weekend.”

Jacob Spino recorded a pair of major decisions to advance to the championship bout at 145 pounds. There he came up on the short end of a 9-2 decision to Orange’s Adam Kirsh. It was Spino’s second loss to Kirsh this season as Kirsh beat Spino, 6-4, at the North Coast Classic in December.

“He’s just a heck of a wrestler,” DeAngelis said of Kirsh. “Sometimes in wrestling some style matchups can lead to some difficulties and we had trouble attacking his legs and he got to our legs. In the sport of wrestling it’s literally that simple. You’ve got to get to his legs and stop him from getting to your legs. The credit goes to Kirsh. We’ll get back in the room in Monday and Jake will finish hard to finish out his senior season strong.”

Hadick knocked off both the No. 2 and No. 3 seeds on his way to the finals. He beat No. 3 seed Ricky Renton of Chagrin Falls, 2-1, in the quarterfinals and pinned Cuyahoga Heights’ Ben Huff, the No. 2 seed, in 5 minutes, 39 seconds in the semis.

“I’ll tell you what, Tanner Hadick, other than A.J. who won the tournament, he wrestled the best on the team,” DeAngelis said. “He put together a heck of a run. He was the sixth seed going in and had a quarterfinals match with Rick Renton from Chagrin Falls, the No. 3 seed, and Tanner beat him 2-1. We had a semifinals match against a kid from Cuyahoga Heights, and anytime you wrestle a kid from Cuyahoga Heights and Independence it’s always going to be a battle, and Tanner did a great job of getting a pin at the end of a close match. In the finals we were right there. He was a takedown away. I couldn’t be prouder of Tanner.”

Heavyweight Paul Deely finished third in one of the most loaded weight classes in the tournament. Deely pinned his first opponent then dropped a 5-0 decision to Perry’s Brandon Truhn. He rebounded with back-to-back pins in the consolation semifinals and the third place bout.

“We knew it was going to be a tough tournament,” DeAngelis said. “Those big boys are unbelievable. You’ll see them on the podium at the state tournament. There’s very little wiggle room with heavyweights. Against Truhn, we got caught on an early takedown and a quick set of back points and before we knew it we were looking at a 4-0 hole. It’s tough to come back from something like that in a heavyweight match. Paul did what Paul does; he took it in stride and came back. You don’t win a team title without overcoming obstacles and bumps in the road. You look at Paul Deely, who expected to win the tournament but didn’t but he comes back and pins for third and fourth. That’s what helps you get on top of the leader board as team.”

He dropped his quarterfinals bout then won two straight, both by pin, to reach the consolation semifinals. A loss there dropped him into the fifth place bout and he scored a 16-7 major decision to seal the Blue Devils’ first conference championship in nearly 20 seasons.

“Kevin was a very good middle school wrestler and didn’t wrestle last year as a freshman so he’s been playing catch up all year, just trying to get back into form,” DeAngelis said. “He’s really, really accelerated that process. He had a very nice tournament; a real good weekend. In his final match for fifth, his win sealed the conference title for us. When he won we knew we had the conference title in hand. He’s a kid to keep an eye on. We expect big things out of him the next couple years.”

Luke Swauger and Nick Sia both finished sixth for the Blue Devils.

“Looking at the total team score, we won by 19 points over a very good Kirtland team, who is going to be wrestling in the state dual finals in Columbus on Saturday,” DeAngelis said. “The four kids that didn’t place earned us a total of 20 points during the tournament. You look at the kids who placed and were on the podium but it was a total team effort. We couldn’t have done it without all 11 guys.”