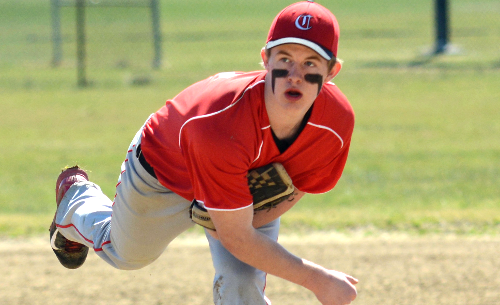 With seven returning starters and 12 seniors on its 15-man roster, the Cardinal baseball team has high hopes for the 2015 season.

The Huskies, who finished 9-9 last season and advanced to the Division III district semifinals, return five of their top six hitters from a season ago and have just two holes to fill in the field.

“We’re really experienced and we’ve got a lot of returning starters,” said Cardinal coach Brian George. “Going around the diamond, at every single position there are guys that have varsity experience and have done quite well. Some of them are four-year starters.”

Seniors KC Cress, Cody Purpura and Clark Thurling enter their fourth seasons as starters and make up the core of the Huskies’ lineup.

Cress batted .371 with a team-high 14 runs batted in and finished the 2014 season with a 3-2 record on the mound and a 2.20 earned run average. He’s expected to be the ace of the Cardinal pitching staff this season and will start at third base when he isn’t pitching and shortstop when Purpura is on the mound.

“We’re looking to get a lot of mileage out of KC,” George said. “He’s going to really have to be a big presence in the middle of our lineup.”

Purpura batted .297 a year ago and is one of the Huskies’ top defensive players. He’ll start at shortstop and see time on the hill.

Thurling batted .271 with 11 RBI and 13 runs scored a season ago. He’ll start at second base for the fourth straight year.

“He’s a good defensive second baseman and we’re looking for some big things from him at the plate,” George said.

Junior Andrew Miller, who had some arm issues last season, is expected to fill the No. 2 spot in the pitching rotation and Purpura is slotted as the No. 3. Junior lefty Alan Michener could also see some spot starts and throw a lot of relief innings.

Senior Joe Tucker returns behind the plate after a solid season in 2014.

“He’s a big defensive presence for us,” George said. “He calls a great game and handles his pitching staff very well. He’s a leader from behind the plate. He’s a tough kid and he really anchors us defensively up the middle. We’re looking for some big things out of him. He didn’t hit much last year but his big contribution is defense.”

Cardinal’s entire infield returns as seniors Logan Schultz, who led the Huskies with a .391 batting average last season, and Evan List, who recorded a perfect 1.000 fielding percentage in 2014, will again alternate at first base and designated hitter and Thurling returns at second and Purpura and Cress are back at shortstop and third base, respectively.

Miller will play third when Cress is pitching or playing short in place of Purpura.

The Huskies have two returning starters in the outfield.

“He is a great defensive player,” George said. “In our district semifinal game last year he ran some balls down in the gaps that I thought were sure triples that he got to. He definitely can go get it. He’s going to be big for us up the middle.”

Senior Brant Zemelka will fill one of the corner outfield spots and seniors Brendan Whitney and Ryan Bruncak will platoon in the other.

“At the corner spots we’re going to have a three-man platoon between Brendan Whitney, Ryan Bruncak and Brant Zemelka,” George said. “Brant was pretty much a starter last year. Ryan and Brendan were kind of late season call ups (from JV). We’re looking for some good defense and some offensive production out of those guys.”

Experience is Cardinal’s greatest strength this season but the Huskies have plenty of talent as well.

“I think defensively we’re going to be very solid,” George said. “I look for us to play solid defense. I think last year we took a step forward in terms of that, so I think that’s definitely a strength. Pitching-wise, I think KC coming back is definitely a strength but we’ve got to get some big innings out of our No. 2 and No. 3 spots going forward.”

Despite the strengths, the Huskies are going to have to improve on their clutch hitting if they hope to achieve their goals.

“We’ve got to hit in run-producing situations, with runners in scoring position,” George said. “I felt like last year we got a lot of great pitching performances out of KC and Zak Butcher and in a lot of places we didn’t push a run across. The games that we’re losing to Kirtland and the good teams were 3-1, 2-1, 1-0 types of games. If we get some offensive production going I think we’re going to be really strong. We’ve got to push some runs across when they’re in scoring position and we really need to get some production out of the bottom of our lineup. Offensively, we need to step forward this year to get to where we want to be.”

The good news is Cardinal’s experience and maturity has shown up in the preseason.

“There is strong senior leadership,” George said. “I can’t say enough about these seniors and the mentoring they’ve done to the younger guys, especially the sophomores and freshmen and how they’ve taken the younger guys and shown them the right way to do things. I’m extremely pleased and proud of these guys and the work that they’ve put in early on in the season.”

Cardinal opens the season on March 31 at Painesville Riverside.