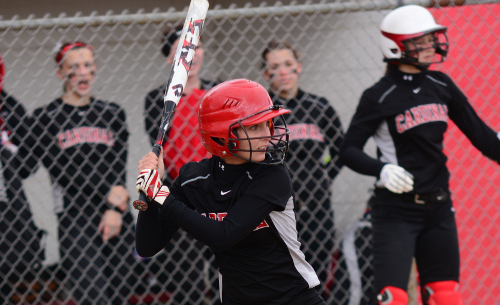 Freezing temperatures couldn’t stop the Cardinal Huskies in their quest for win No. 1 this season.

The Huskies, led by Ashleigh Shepard and Lexy Fenselon, pounded out 16 hits to beat Gilmour Academy, 16-5, in a non-conference matchup at Gilmour on Thursday.

“It was great,” said Cardinal coach Dennis Ikeler. “The girls went out there and had fun tonight. They played well. We had good offense, good defense. They just came into their own tonight. Hopefully we can carry that forward.”

Shepard was 4-for-5 with two triples, three runs scored and she knocked in five runs.

“She was on it today,” Ikeler said. “She was seeing the ball well and standing up and driving through it.”

For Shepard and the Huskies, the win was long overdue and provided a confidence boost heading into the final month of the season.

“I think it boosted our confidence a lot,” she said. “I think taking a break from the (league) games too kind of gave us a relief to get our heads back together and I definitely think that we played as the team that we are today.”

Fenselon also had a big day at the plate.

She was 3-for-4 with a double and three RBI.

“Lexy finally came out of her slump,” Ikeler said. “She was driving the ball well and had some nice, solid hits.”

The Huskies jumped out to a 4-0 lead in the top of the first and added four more in the second to take control of the game. The Lancers got one back in the bottom of the second but Cardinal’s five-run third put the game away.

Megan Baril started in the circle for the Huskies and allowed just two hits and a run in two innings to pick up the win. Courtney Ellis threw the final four innings. It was her first varsity pitching action.

Ellis struck out six in her four innings of work.

“That was great to see,” Ikeler said. “That was her first time pitching on the varsity and some of those runs were unearned. I had some JV kids out there and everything, so I wasn’t upset over that. It was a good experience for the JV kids to get out there in a varsity game.”

With Baril, Cardinal’s starting third baseman, on the mound, Ikeler was forced to shuffle his lineup. Shepard moved from second to third and Fenselon moved from centerfield to second base. Allissa Nevison filled in for Fenselon in center.

“Allissa Nevison had a spectacular catch out there,” Ikeler said. “Haley Adams did a great job behind the plate and everybody played well.”

Adams was 2-for-5 with three RBI and Baril and Nevison also knocked in a run for the Huskies.

Cardinal heads to Harvey on Friday in search of a winning streak.