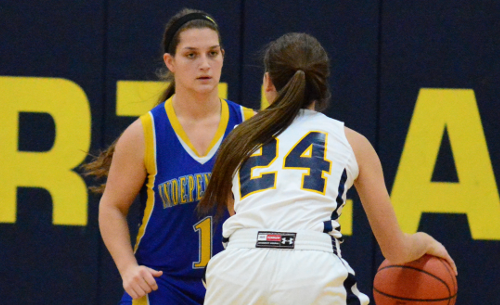 At one point this season the Independence Blue Devils struggled to win back-to-back games.

After Saturday’s 44-39 home win over Wickliffe, the Blue Devils have won three straight and now sit at 8-5 overall and 2-4 in the Chagrin Valley Conference Metro Division.

“Our goal was to sweep the week,” said Independence head coach Mike Marcinko. “We’re getting better and we’re finding a little bit of a stride. That was our goal and we thought it was attainable and at the end of three games in a week we got three Ws. Like the girls said after the game, we did everything we needed to do to get a W.”

Independence jumped out to a 12-6 lead after the first quarter and led, 26-12, at halftime. The Blue Devils went into the break with confidence but without leading scorer Halle Dorko.

Dorko suffered an ankle injury late in the second half and did not return.

“We got out pretty well then Dorko got hurt,” Marcinko said. “She was driving down the lane and just kind of turned her ankle. Hopefully it’s not too bad. Fortunately she wears ankle braces.”

Independence’s success in the first half started on the defensive end of the floor.

“We pressed them and we turned them over,” Marcinko said. “We got them tired and we got their big girl (Mariah Porter) tired. We got some nice buckets. Dorko was driving in the lane and Hallie Zumack too. We got a lot of good looks inside because they were tired. They were fatigued and we weren’t. We executed and attacked the rim. It was kind of coming together as far as momentum. We were up by double digits the majority of the first half feeling not comfortable but feeling confident and feeling in charge.”

With Dorko sidelined in the second half Marcinko was forced to go to a smaller lineup and he changed his strategy.

“We ran some motion, some five out, four out motion looking for layups,” he said. “My background with college, I know the girls were laughing at me, I said, ‘Let’s try and get nothing but layups for the shot clock then I had to correct myself and say 30 seconds.’ We would run motion, we’d curl and screen and back cut and try to get a layup in the first 20 or 30 seconds then we would run a set. If we didn’t get anything we liked we would run a set. That seemed to keep Wickliffe moving and us organized.”

Independence won the third quarter, 14-3, but Wickliffe stormed back in the fourth to outscore Independence, 14-4. Wickliffe cut the final deficit but ran out of time.

“A lot of that had to do with them fouling us and really uncharacteristically of us we did not shoot the ball well from the line down the stretch and that kept them in the game,” Marcinko said. “We were still trying to execute the motion and run a set. That’s kind of where missing Halle kind of got us. We didn’t get any put backs and then we’re losing someone that can get to the rim because now I’ve got more perimeter players out there and not that they didn’t do a good job it’s just the personnel dictated it differently.”

Victoria Sirna led the Blue Devils with 12 points. Her 3-pointer with just about two minutes to go in the game was one of the biggest shots of the game.

“She hit a clutch, crucial three down the stretch that kind of kept us at arm’s length away,” Marcinko said. “She’s always defending and rebounding for us. It’s her senior year, we’re not at the end yet, but you definitely want to go out with a bang and she’s really just been gradually getting so much more confident in the way she’s been playing offensively and not taking shots and looking over her shoulder wondering if it’s a good shot or a bad shot. We’re always telling her if her feet are set to lift. I think she’s got to the point where she’s got her feet set and letting it rip and knocking two or three 3-pointers a game in.”

Zumack added nine and Dorko scored eight, all in the first half. Julia Riley and Nicole Ferrara both chipped in with six.

Independence plays at Trinity on Monday.