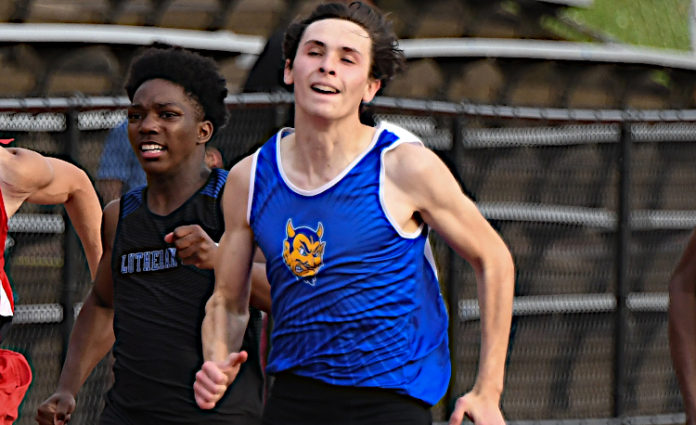 Six Independence athletes earned a shot at a state title when they finished among the top four at the Division III Massillon Perry regional on Friday.

Emmett Stralka qualified for state in three different events including the 100 and 200-meter dashes and the 4×200-meter relay. Casey Adams and Madison Stepanik both finished third in their respective events and Kyle Zygmunt placed in the 400-meter dash and also ran a leg in the 4×200. Jack Taliaferro and Josh Belitz teamed up with Stralka and Zygmunt in the 4×200.

“The most satisfying thing about running well in three events was being physically ready to compete at this level,” Stralka said. “Coach (Jess) Crooks did a fantastic job this year rotating runners in meets and treatment of minor injuries so that I would be ready to perform at the top levels at the end of the season. For her first year, she certainly deserves coach of the year.”

The Independence team placed second with a time of 1:32.31.

“Jack has always been a strong runner since he was a freshman,” Stralka said. “Kyle added a ton of speed to our team this year and having Josh finish our relay is a tribute to this team’s depth of talent. It was really exciting to see Independence in the number two spot on the scoreboard. For me, this was my favorite event because it was an outstanding team effort. Personally, I was surprised with my 200-meter performance. I was originally seeded 12th and finished as the regional runner-up with a (personal record).”

While Stralka will make his first appearance at the state meet, he’ll feel right at home with his teammates by his side.

“Having a large Independence presence at states, especially my relay team with whom I have been practicing all year will help keep the excitement in check,” he said. “Also, Coach Crooks always is there to calm my nerves during the meets and at school. It is great to have an approachable teacher at school to talk to before the meets. Managing stress is always a difficult challenge for a student-athlete, which is why I inadvertently signed up for the SAT next Saturday morning as a diversion.”

Stepanik finished third in the shot put on Wednesday and closed out the regional meet with a seventh-place finish in the discus with a throw of 107-feet, 1-inch.

Adams’ magical freshman season will continue after she placed third in the long jump with a best leap of 16-feet.

“It was so exciting to learn that I had qualified for state,” Adams said. “Qualifying as a freshman is just so exciting because I get to go to state this year and I still have three years left to compete.”

Adams had set a goal for herself but had to adjust due to the inclement weather that passed through the area.

“Today, I was aiming to match my district title of 16-7,” she said. “However, the bad weather today really put a wrench in everyone’s performance.”

While Adams expects to experience some nerves at the state meet, she plans to focus on what earned her the opportunity in the first place.

“I will try to manage my stress by outweighing it with excitement,” she said. “My coaches and parents always tell me to just ‘Do what I do,’ and I plan on just trying my best and sticking to what I do best.”

Zygmunt finished third in the 400-meter dash with a time of 50.42 seconds and he’ll join his teammates at the state meet.

Independence’s boys’ team placed seventh with 28 points while the girls were ninth with 22.

The Division III state track meet will be held at Westerville North High School on Friday and Saturday, June 4-5.