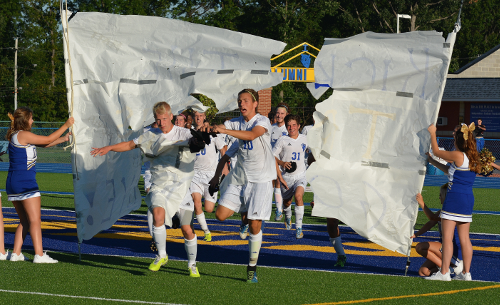 Six different players scored at least one goal to lead Independence to a 9-2 win over visiting Open Door Christian School on Thursday.

“This was a match between district opponents that was much closer than the score appeared,” said Independence coach Ryan MacRaild. “Open Door had a good attack with quickness up top and also a strong center defender.”

Independence’s success was due to the Blue Devils’ ability to use the entire field.

“(We) went to possession mode and started moving the ball around a little more effectively to work around the defense and find scoring opportunities,” MacRaild said. “With six guys scoring in the match, finding the open player was key.”

Belitz, who now has seven goals in his first three high school games, and Collins controlled the midfield while Ryan Straub and Christian Seif worked the ball well out of the wings. Mewhinney and Kunevicius were disruptive up top and Fields, Jared McCullough, David Wizniewski and Matt Mroczynski shut down Open Door’s offense. Benos also played well in the midfield.

Mewhinney (2), Collins, Kunevicius, Fields, Seif and Nathan Wells all had assists for the Blue Devils, who improved to 2-0-1 on the year. Jake Laski and Tyler Korecko each had one save in goal.

“By the end of the match, all players had gotten on the field,” MacRaild said. “All in all this was a solid team effort looking for chances for each other and playing as a group.”

Independence travels to Wickliffe on Tuesday.