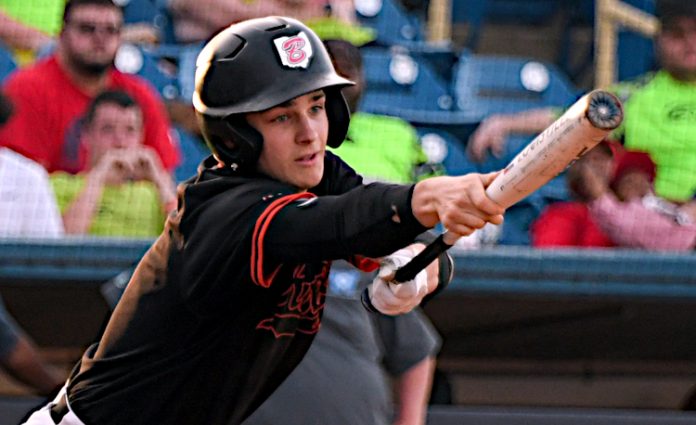 Kevin Skolny earned a win in his first varsity start of the season and Trent Bucy recorded three hits in North’s 10-7 win at Madison on Tuesday.

The Rangers trailed 5-3 before scoring six runs in the sixth to pull away from the Blue Streaks.

“We had Kevin Skolny come up to pitch for us just for the simple fact that we want to conserve arms and he has been doing a really good job down on JV,” said North coach Joe Iveljic. “He gave us six solid innings and threw strikes. He did a really nice job for us.”

“It was very exciting as I thought going into today this was my chance to prove myself and I knew I had to take advantage of it,” Skolny said. “The biggest thing was mixing in my curveball every now and then, as that way I could keep their hitters guessing on each pitch.”

The Rangers scored one run in the top of the first to give Skolny a lead to pitch with and each time Madison scored, his teammates came right back with runs of their own.

“It feels great knowing that even if I get down my teammates can pick me right back up with their bats,” Skolny said. “It adds a sense of security when I’m up there.”

Andrew Gunton singled in the top of the second and scored on Chase Federer’s double.

Madison came right back with a run on one hit in the bottom half of the inning. The Blue Streaks added two runs on two walks and a single in the third.

North tied the game with two runs in the top of the fourth.

Matt Barner started the rally by reaching on an error and Owen Hopper and Federer both hit two-out singles. Brody Spock followed with a double.

Madison added two more in the bottom half of the inning on a single, a double, a walk, and a hit batter.

The Rangers pulled ahead with their six-run sixth.

Blane Schmidt, Hopper, Federer, and Spock all singled to start the inning and Devin Nix drew a walk. Ethan Zele then singled and Bucy doubled. Barner singled and Gunton drew a walk before the Blue Streaks recorded an out in the inning.

Bucy and Federer both led the Rangers with three hits and Zele, Hopper, and Spock all contributed with two.

“From top to bottom, everybody got it going today,” Iveljic said. “Chase hit the ball really well and one-hopped the fence on a couple of them. His bat came to life today. I think the warm weather definitely helped that as well.”

Jacob Henderson threw the seventh inning for the Rangers. He allowed two unearned runs on one hit and struck out one.

North travels to Riverside on Wednesday.