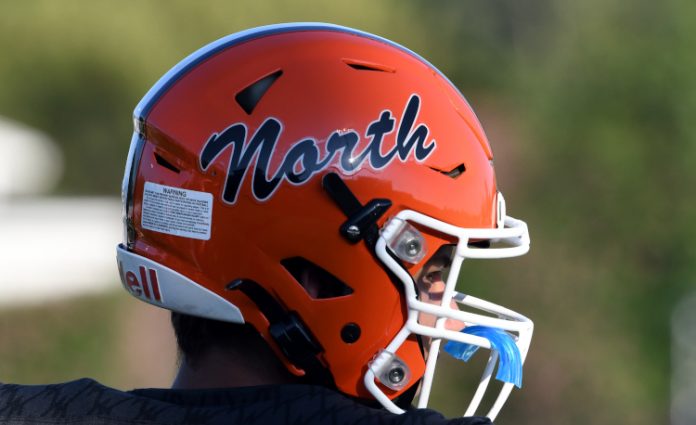 WILLOUGHBY–The cannon was firing early and often Friday night at Harry E. Winters Stadium as the unbeaten South Rebels (5-0) overwhelmed rival North early on, cruising to a 35-0 lead at halftime and never looking back in a 38-7 victory.

“That’s a good football team,” North coach Sean Dodd said. “We can’t make mistakes against a team that is that good. They’re a very senior-heavy team and we’re starting a couple sophomores with some guys out. No excuses, but in that type of situation, on the road against a team that’s rolling, and you get a drive going, and then you fumble, and then you come back and fumble again, and we give up some quick strikes in the first quarter. And then those couple scores (they got) at the end of the half, that really put the nail in the coffin.”

The Rangers (2-3) got off to a decent enough start, driving deep into enemy territory on their opening drive before senior running back Mo Morgan was stripped of the football on a run up the middle.

Coming out in a no-huddle shotgun spread attack for much of the night, the Rebels ran junior signal-caller Colin Quinlan early and often on the night, opening with three straight quarterback runs on their first possession. Facing a 4th-and-11 early in the first quarter at the North 22, a 20-yard burst over the left side by senior running back Andrew Osagie gave the Rebels their first scoring chance, and Quinlan quickly converted from two yards out for the opening score.

The Rebels would never trail.

A 57-yard run off tackle from talented junior running back Tyrone Singleton and two more touchdown connections through the air from Quinlan to his favorite target on the night in receiver Bryce Figler and South was suddenly on top by a significant margin, leading 28-0 with 3:15 left in the first half.

Just when it looked like the game would get to half at 28-0 South, another stalled North drive left enough time on the clock for Singleton to cash in one last first-half touchdown for the hosts on an 18-yard scamper with time winding down, sending the hosts to the break with a healthy 35-0 lead.

The second half was played with a running clock due to the 30-point deficit with a 21-yard field goal from South and a late fourth-quarter fumble recovery in the end zone from North’s second team closing out the scoring. Another chapter – this one to the Rebels – in the Border Brawl complete.

Ever the optimist, Dodd had a message for his disappointed charges as the Rangers huddled after the game.

“We’ve got a must-win situation this week in my eyes, to get back to even, and now you’re playing for something in the back half of the year,” Dodd explained. “We just can’t allow this game to be the season. It’s a rivalry game and I know we’re embarrassed and all of those things, but we cannot allow this to end our season. There’s still a lot of football left.”

On the South side of the coin, head coach Matt Duffy walked off feeling pretty good about the effort he saw out of his side.

“They play so hard and quite honestly, as their coach, they’re fun to watch. I tell everyone that. They play hard on defense, and they’re fast to the ball, they’re always churning and playing fast,” he said. “Everyone is getting better week-to-week, so overall it’s just been a lot of fun to coach.”

Duffy is also enjoying seeing his quarterback and his receivers continue to develop chemistry and timing in the passing game. South teams have long been known for their running prowess, but being able to stay balanced and convert through the air when necessary, makes the Rebel attack tougher to defend.

“Those kids (Quinlan and Figler) are both juniors, they both played last year, and they’ve really started to get it going over the last two weeks, the two of them,” Duffy said. “I think Bryce has like four or five touchdowns in the last couple weeks, and Colin is getting better at the quarterback spot every time out, so yeah I do think those guys are growing together and it’s fun to watch.”

Matthew Grassi
Grassi, a 2010 Cleveland State University graduate, is a former Northern Michigan sports editor that has spent the last decade covering agriculture and agriculture technology for various B2B publishing companies around the Cleveland area. A Painesville native, he played varsity football and ran track at Riverside High School and played a year of DIII college football at Heidelberg College in Tiffin, Ohio. He’s an avid Cleveland Browns fan and a devoted dynasty fantasy football and sports gambling enthusiast, and he still plays basketball with a group of high school friends every morning on the far eastside.
-Advertisement-