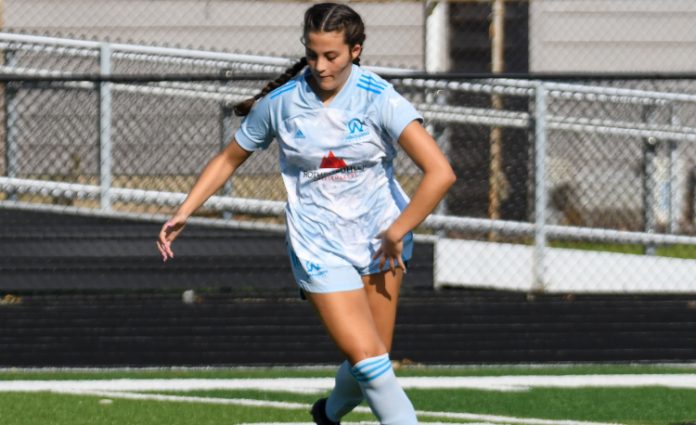 South senior Laney Matriano has Irish eyes after announcing on Saturday her intention to continue her education and soccer career at the University of Notre Dame.

“I’m very excited to have the opportunity to do what I love at the collegiate level,” Matriano said. “I’ve wanted to play college soccer for as long as I can remember and I’m glad it’s finally happening.”

Despite the challenges the COVID pandemic created for college coaching staffs, the Irish were effective in promoting their program and academic offerings.

“The first time Notre Dame watched me was my sophomore year, but because of COVID and the NCAA recruiting rule, we were not allowed to really communicate until this summer,” Matriano said. “However, I was very fortunate that they stuck with my progress and training throughout the dead period. I visited at the end of August and the campus blew me away right when I got there. Along with that, the combination of the amazing education and being top soccer program really convinced me.”

Matriano used the South Bend visit to learn more about the school and the soccer program and she felt right at home with the coaching staff.

Her relationship with current Irish player Kati Druzina, who played at Lake Catholic, sealed the deal.

“I really enjoyed the time I got to spend with the staff on my visit,” Matriano said. “They are all great people and really look out for their players. The team was very welcoming and I am actually familiar with some of the players as I live 10 minutes from current player, Kati Druzina, and have trained with her for a couple of years now.”

“With college, things can happen so I think being flexible to fill whatever role they need me in is key,” she said.

The jump from high school to college will provide its own challenges for Matriano, but she has spent the past two seasons playing for the Cleveland Ambassadors in the Women’s Premier Soccer League. WPSL rosters are filled primarily with current college players, so Matriano is more than ready to compete at a much higher level.

“I’m very lucky to have had the opportunity to play for Cleveland Ambassadors WPSL team for the last two years,” she said. “My teammates are all current college players or out of college so I think being in that environment has definitely taken my game to the next level and prepared me for college.”

Matriano isn’t quite sure what she’ll major in at Notre Dame but she’s leaning toward a career in business. She also hopes to play professionally, either in the United States or overseas.

Third time the charm for Chardon in win over South