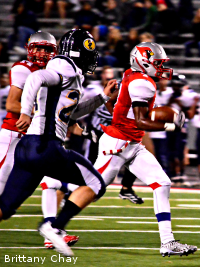 Special teams for Mentor in Week 8 has ensured a special matchup in Week 9 for the undefeated Cardinals.

Sparked by two blocked field goals and a kickoff return for a touchdown by standout Marc Walton, Mentor improved to 8-0 on the season with a 42-16 win over Solon at Jerome T. Osborne Sr. Stadium on Oct. 17.

The victory coupled with a Hudson win over Strongsville sets up a marquee, heavyweight matchup most high school football fans started looking forward to in August.

"It's a short week, a big week and we have to get back to work," Mentor coach Steve Trivisonno said of the Thursday night showdown at Hudson.

"I really haven't seen Hudson much, but it is two 8-0 teams and we will see what we are made of."

What the Cardinals saw on Friday night at the JTO was a big boost from the special teams unit.

Early in the first quarter, Solon recovered a Mentor fumble and seemed destined to take the lead immediately, but a block of a short field goal on the interior by Nico Lautanen and Billy Hudson kept the game scoreless.

After a touchdown pass from Jake Floriea to Jason Blizzard put the Cardinals on top, 7-0, the Comets threatened again only to have Walton come off the edge to block another field goal.

After a third successful try on a field goal by Solon cut the Mentor lead to 7-3, Walton responded with a 73-yard kickoff return for a touchdown in the second quarter to give the Cardinals an 11-point edge and momentum that carried over into the third quarter.

"We knew coming into the game that special teams would be a key factor so we played hard when we are in those situations," Walton said.
I can't take all the credit for those plays. I have to credit my teammates for that.

"Special teams are key in a game like this and if you can get points off that it is huge."

Touchdown runs by Eddie Daugherty and Alex Mathews were part of a big third quarter for Mentor as the Cardinals jumped out to a 28-3 lead. Matt Smith's 91-yard kickoff return for a TD for Solon (5-3) was the lone blemish on the night for the Mentor special teams, but the Cardinals responded with two more touchdown runs by Daugherty to put the victory safely away and set up the unbeaten matchup against Hudson in six days.

"I thought we came out and did some good things tonight, but we have to clean some things up and keep getting better," Trivisonno said. "I think you have to give Solon a lot of credit for some things they did tonight."

Solon quarterback Matt Laubscher, playing for the injured Johnny Mooney, was lauded by Trivisonno for a solid evening running the Comets offense. Laubscher was pressured constantly, however, as the Cardinals recorded seven sacks on the night.

The evening began with ceremonies at the JTO for Parents Night, which was particularly special for Lautanen. The All-Ohio defensive lineman walked on the field in the pregame with his mother and his father, who had been hospitalized a few weeks back.