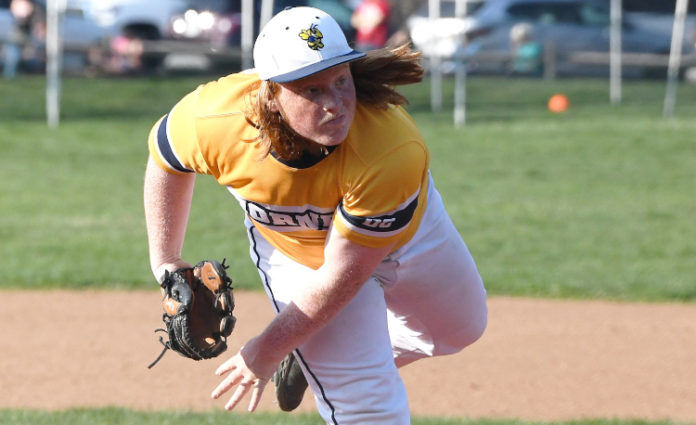 Kirtland senior Andrew Spencer developed a passion for playing baseball and in January he announced he has no intention of hanging up his cleats following his last year of high school baseball.

Spencer, the bulldog of Kirtland’s pitching staff, has accepted an opportunity to continue his playing career and education at the University of Mount Union in Alliance, Ohio.

“It is very exciting to play the sport I love for four more years,” Spencer said. “Baseball has opened so many doors for me. I have met many coaches and players that I can call on for help or just someone to talk to and I’m very happy that I can continue this at the University of Mount Union.”

Spencer, who plans to major in civil engineering, found what he needed at Mount.

“The number one reason that went into the decision was academics,” he said. “Does this school provide the necessary tools, like my preferred major, and will they prepare me for my life ahead? Another reason that factored into my decision was obviously the baseball coaches and team. When I walked onto the campus and met with the coaches it felt like I belonged.”

“As a pitcher, I’m not known as a guy that will blow you away and that’s fine,” Spencer said. “Throwing 98 miles per hour and walking people left and right does not win you ball games. You have to spot up all the pitches you throw because the most important thing is strikes. I just simply get people out and I attribute that to the way I can throw any of my three pitches–fastball, changeup, or curveball–for a strike consecutively. Kids nowadays are too focused on the numbers; the only number you have to focus on is strike one.”

Spencer isn’t sure if he’ll be in the starting rotation at Mount Union or if he’ll come out of the bullpen. But, he does know he’ll give it his all regardless of the role he fills.

“If they need me as a starter I’ll start or if they need me as a reliever or closer I will,” he said. “I obviously prefer to start because that is what I have been all my life, but if you want to play at the next level you have to be versatile. If you’re not, there are three or four more guys ready to take your spot.”